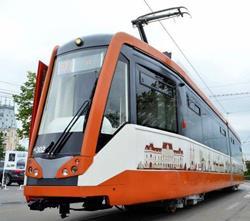 ROMANIA: Electroputere VFU presented the first rebuilt GT4 tram to Iaşi Mayor Gheorghe Nichita on June 27. The project was jointly developed by city transport operator RATP and Electroputere VFU, which carried out the work at its Paşcani factory.

Nichita praised the ‘European standard’ of the upgraded tram, now branded GT4M. The city plans to upgrade its entire fleet of 120 trams for €80m rather than purchasing new cars at a cost of €240m. Nichita hopes to finance this with the help of EU funds being made available from 2014.

‘We have a big advantage because we already have a large proportion of modernised infrastructure. We can thus more easily access funds to upgrade trams’, said RATP Director Maricel Gherca. According to Electroputere VFU, the entire fleet could be upgraded within two years. The work would include making the trams low-floor.

The car is one of the first batch of 10 GT4s purchased from Stuttgart in 1997. Built by Maschinenfabrik Esslingen in 1962, it operated in Stuttgart for 35 years. The vehicle was taken out of service for rebuilding in late 2010. After testing that began in 2012, the modernised tram was approved for use by regulatory authority AFER, and will now be trialled on several routes on the metre-gauge network in Iaşi.

The two-section tram has capacity for 138 passengers, including 29 seated. Its maximum speed is 60 km/h. Only the original underframe remains in its entirety, and this has been reinforced in places. The body has been partly rebuilt to accommodate heavier equipment on the roof, including a Schunk pantograph. The bogies have been rebuilt with two new traction motors and four independent braking systems. The car is the first in Romania to be fitted with a data recorder.

Other features include air conditioning, a passenger information system, electronic displays, ticket validators and CCTV. The driver’s cab is larger and instead of mirrors has screens showing images from three external cameras. Around 60% of the new equipment was manufactured in Romania.