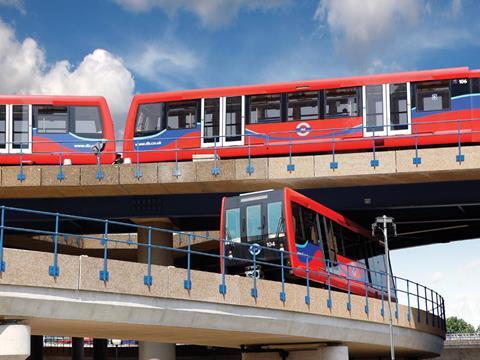 UK: Invitations to negotiate for a contract to supply 43 trainsets for the Docklands Light Railway driverless light metro were issued to four prequalified bidders by Transport for London on November 17.

The prequalified bidders are:

TfL invited expressions of interest in the contract in May, when it put the estimated value at between £500m and £850m excluding VAT. It expects to award the contract to build the trains in autumn 2018, with entry into service planned from 2022.

The order for 43 trainsets would include 33 to replace two-thirds of the existing fleet, and 10 to increase overall capacity.

The 750 V DC third-rail fixed-formation trainsets are required to be between 86·4 m and 88 m long, longer than the existing sets, with walk-through gangways, on-board real-time passenger information, air-conditioning and mobile device charging points.

‘This important step in the procurement process brings us closer to delivering the new trains needed to support the continued passenger growth on the DLR, which currently carries 122 million customers a year’, said TfL’s Director of Rail & Sponsored Services, Jonathan Fox, when the shortlist was announced. ‘These new trains will enable us to increase capacity on the network by up to 30%, significantly improving the comfort, reliability and quality of our service for customers. They will also support the creation of further jobs and homes in the Docklands area.’