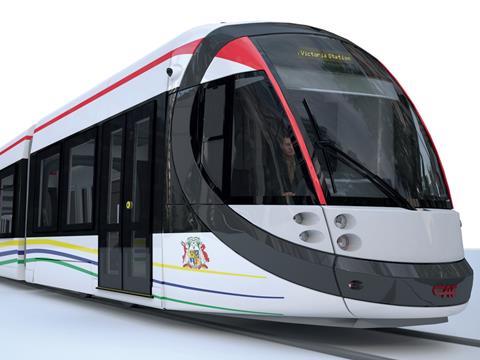 MAURITIUS: CAF is to supply a fleet of 18 Urbos light rail vehicles to operate the Metro Express light rail line, following the signing of a €100m contract with Larsen & Toubro Ltd on December 26. The Indian firm is responsible for procuring the rolling stock as part of its turnkey contract to build and equip the 26 km route linking Port Louis and Curepipe, which was awarded in July.

CAF is to supply 18 bidirectional seven-section 100% low-floor cars. The Spanish firm will also be responsible for the signalling, an automatic vehicle location system and the transit signal priority system linking the light rail and road signalling. It will also supply depot equipment and a driver training simulator.

Connecting the capital Port Louis with four of the island’s main cities - Quatre Bornes, Rose Hill, Vacoas and Curepipe – the Metro Express line will largely follow the alignment of the former 1 435 mm gauge Mauritius Government Railways’ Midland Line, which was abandoned in 1964.

Construction of the light rail line began in September, following a groundbreaking ceremony earlier in the year. The initial 13 km section from Port Louis to Rose Hill is scheduled to open for revenue service in 2019, with the remainder of the line to Curepipe following in 2021. The completed line will have 17 ground level and two elevated stations. The end-to-end journey time is expected to be around 40 min.