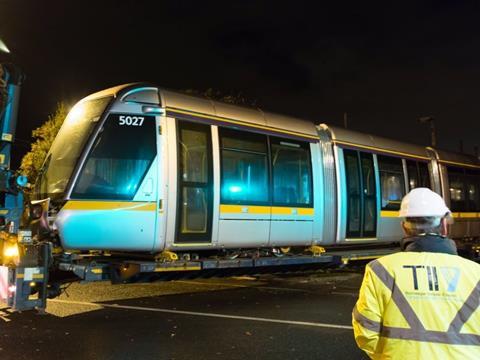 IRELAND: The first of seven nine-section Citadis trams has arrived in Dublin from Alstom’s La Rochelle factory. The vehicle was shipped to the port of Rosslare, from where it was transported by road to Luas’ Sandyford Depot on November 16.

Transport Infrastructure Ireland placed a €36·5m order for the trams in November 2015. The 54·6 m long vehicles with capacity for 379 passengers are due to be delivered in time for the opening of the Luas Cross City extension of the Green Line, which is planned for December 9.

The €368m project will extend the route by 5·9 km from St Stephen’s Green to Cabra, adding 13 stops. Test running started in June with two Citadis trams from the existing fleet.