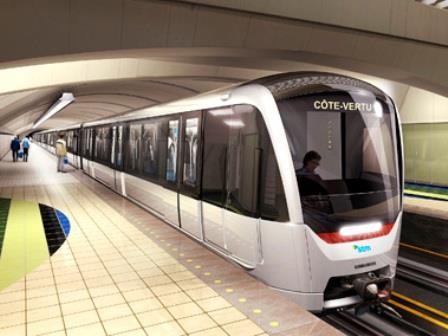 CANADA: Société de transport de Montréal confirmed on October 22 that it had signed a C$1·2bn contract with a consortium of Bombardier and Alstom for the supply of 468 rubber-tyred metro cars. The 52 nine-car trainsets will allow STM to replace its MR-63 fleet, which has been in service since 1966.

A prototype trainset is due to be delivered in June 2013, with series deliveries to run from February 2014 to September 2018. To comply with STM requirements, the project includes 60% Canadian content. Design, manufacture and final assembly will be undertaken at Bombardier’s plants in La Pocatière and Saint-Bruno, Québec, with input from Alstom sites in Sorel-Tracy and Montréal. Bombardier’s share of the contract value is estimated at C$742m while Alstom’s share is around C$493m.

STM began the procurement process for new cars in 2005, and selected Bombardier, but the deal was halted by a legal challenge from Alstom. STM then tried to negotiate with the two companies, before scrapping the process and calling new tenders earlier this year. On October 7, the Québec National Assembly passed a bill allowing the provincial government to award a ‘no-bid’ contract to a consortium of Bombardier and Alstom, and protecting STM from legal action by disappointed tenderers.

‘Bombardier and Alstom commend the determination of the government of Québec and the city of Montréal to bring about an efficient resolution to this bid process’, said Raymond Bachant, President of Bombardier Transportation, North America. Alstom Canada’s President Pierre Gauthier added that ‘STM will benefit from the combined expertise of the two largest transport manufacturers in the world’, who were major contributors to both the MR-63 and MR-73 fleets.