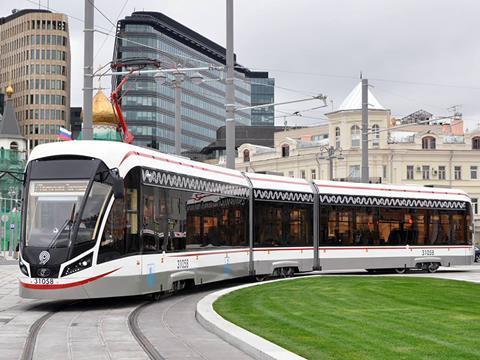 RUSSIA: A relatively short but important extension of the Moscow tram network from Lesnaya to the Belorusskaya railway and metro stations at Tverskaya Zastava square opened on September 9, as part of celebrations to mark the city’s 870th anniversary. This is the first tram extension in the central area of Moscow for many years.

Around 17 000 passengers/day are expected to use the extension, increasing to 30 000 by the end of the year.

The extension is served every three to four minutes by tram routes 7 and 9 which use Metrowagonmash/PK Transportnye Systemy Vityaz-M 100% low-floor articulated trams. Route 7 offers a journey time of around 30 min between Belorusskaya railway station and the ‘three stations’ square which gives access to the Leningradski, Kazanskaya and Yaroslavskaya stations. This is slightly slower than the 20 min by metro, but without escalators and stairs which are inconvenient with luggage.