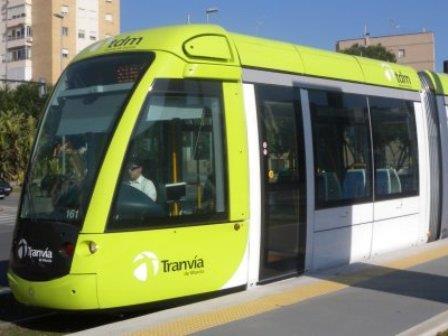 The main route has 24 stops and runs from Estadio Nueva Condomina in the northeast to the University of Murcia campus in the northwest, via the city centre. A branch with four stops connects Los Rectores-Terra Natura to the Catholic University site at Los Jerónimos in Guadalupe.

A 2·2 km demonstration line built by the Tranvimur joint venture of Acciona and Grupo Cívica entered service along Avenida Juan Carlos I in April 2007. Two years later, the Tranvía de Murcia consortium of FCC and Comsa was awarded a 40-year contract to build, operate and maintain the 17·5 km network, including the pilot section.

Tranvía de Murcia has a fleet of 11 Alstom Citadis 302 vehicles acquired from Metro Ligero in Madrid. The low-floor bi-directional trams can carry 186 passengers, including 54 seated, and run at a commercial speed of 23 km/h on the main line and 27 km/h on the branch. Power is drawn at 750 V DC from overhead catenary but a proposed southern extension to Murcia station would use catenary-free operation along Gran Vía.