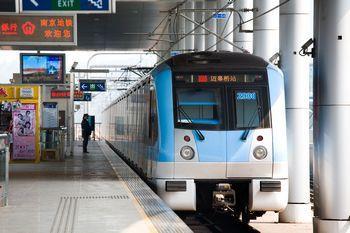 CHINA: Nanjing Metro almost quadrupled the size of its network when it inaugurated a second line and a 25 km southern extension of Line 1 on May 28, increasing route length from 22 km to 85 km and the number of stations from 16 to 57.

Line 2 is 38 km long with 26 stations and runs mainly underground from Jingtianlu, in the northeastern suburbs of Nanjing, via the city centre to Youfangqiao in the southwest. The line has two interchanges with Line 1, at Xinjiekou and Yuantong. Line 2 will be worked by 144 Metropolis cars currently being supplied by Alstom and its Chinese partner CSR Nanjing Puzhen. Formed of four motor cars and two trailers, each six-car train has a maximum capacity of 1 860 passengers.

The newly-opened southern branch of Line 1 links Andemen to the China Pharmaceutical University and has 15 stations. A consortium of Nanjing CSR Puzhen, Alstom and the SATEE joint venture of Alstom and Shanghai Electric Group is supplying 21 six-car Metropolis trainsets to supplement the 120 Metropolis cars already working the first section of Line 1, which was inaugurated in September 2005.

A 14·4 km eight-station extension of Line 1 running west from Olympic Stadium and passing under the Yangtze River is currently under construction. When the extension opens in 2014, the network will be reconfigured and the western branch of Line 1 from Andemen will become Line 10.

Work on Line 3 started in January 2010. This new north-south line will be approximately 40 km long with 28 stations. A 600 km metro network comprising 17 lines is envisaged in Nanjing by 2050.