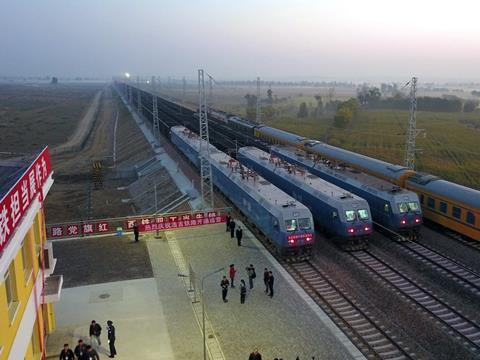 CHINA: The 1 813 km Menghua heavy haul coal railway opened to traffic on September 28 when an inaugural train left Haolebaoji at the northern end of the line.

Now renamed in Chinese as the Haoji line to reflect more accurately its start and end points, the railway was authorised by the National Development & Reform Commission in 2014. It has been designed to connect coal producers in Shanxi and Nei Mongol with consumers in Hubei and Jiangxi provinces. It differs from the earlier long-distance coal lines in that it runs north to south, rather than west-east to feed coastal shipping routes.

The railway has been developed by the Mengxi Huazhong Railway Co, whose shareholders are providing 35% of the total investment. These shareholders include more than a dozen public and private transport, energy and investment companies. Loans from domestic banks, including China Development Bank, Bank of China, China Construction Bank, and the Industrial & Commercial Bank of China, are funding the remainder.

Being built to Grade 1 standards, the electrified line runs from Ji’nan Haolebao in the Ordos district of Nei Mongol to Ji’an in Jiangxi province, where it will connect with the Beijing – Kowloon line. It is being routed via many existing rail centres, notably Yan’an, Sanmenxia, Hengyang, Yueyang and Xinyu, which will allow repair and stabling facilities to be co-located with CRC’s existing installations. The alignment has been designed for a maximum speed of 120 km/h, with a minimum curve radius of 1 200 m.

The line has been designed to carry more than 200 million tonnes of traffic per year, with 10 000 tonne trains operating on the double-track section north of Xiangyang and 5 000 tonne trains on the southern section.

A full description of the Menghua coal railway appeared in the June 2019 issue of Railway Gazette International, available to Print & Digital subscribers in our digital archive.