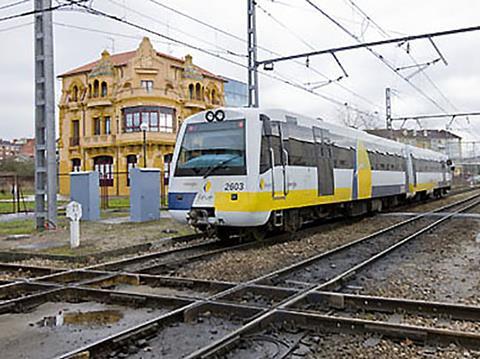 ASFA Digital is being rolled out across the various narrow gauge networks in Spain.

SPAIN: On April 28, ADIF announced the award of a contract worth €97∙5m to a consortium of Sistemas y Montajes Industriales and Siemens Rail Automation for packages 1 and 3 of the programme to roll out ASFA Digital ATP across its conventional network. Package 1 is worth €62∙0m and Package 3 €35∙5m.

ADIF let its first contracts to digitise the analogue system as long ago as 2005, with the aim both of improving the functionality of ASFA where it was already installed, and of expanding the coverage to 1 668 mm and narrow gauge lines which had no train protection systems.

Legislation passed by the government on July 17 2015 set out the timescales for equipping all 1 668 mm gauge vehicles with ASFA Digital by June 30 2018, and all metre-gauge vehicles by April 30 2019. Operation using telephone block was to be eliminated by January 2024.

The roll-out is taking place in two stages, with the first already completed. This saw Indra, Logytel and Siemens install supplementary balises under an eight-month contract worth €13m awarded in April 2016.

The latest contract covers the manufacturing, supply and installation of equipment necessary for the introduction of additional frequencies under ASFA Digital; the analogue variant is restricted to just five frequencies, but the digital update will allow far more, providing much more precise information to the driver. This will require the replacement of most existing trackside assets and modification to the onboard units. Once the work has been completed, ADIF will be able to turn off the remaining analogue equipment.

ASFA Digital will be broadly able to mirror the functionality offered by ETCS Level 1. While ETCS is being rolled out on new lines, international corridors and the Madrid and Barcelona suburban networks, ASFA Digital is expected to remain the backbone of train protection in Spain for many years, with industry insiders citing the ‘astronomical’ cost of rolling out ETCS across the whole network.