ROMANIA: The railway has been praised for the pace of reform in recent years as it has adapted smoothly to a competitive market. In an effort to maintain this momentum, AIF, the country’s railway association, took a pavilion at InnoTrans for the first time. Secretary-General Stefan Roseanu outlined a bright future for the industry to Nick Kingsley. 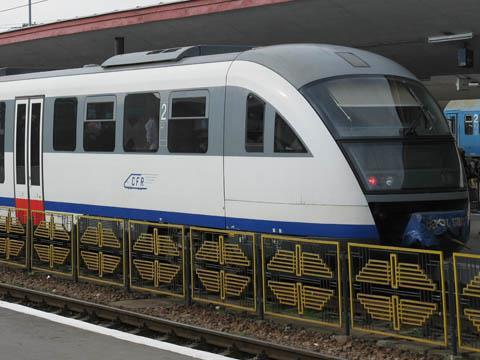 Broadly speaking, what do you consider to be the greatest challenge facing the Romanian railway industry over the next five years?

There are always challenges. On the one hand, the Romanian industry is young - most of our members are just 17 or 18 years old, having of course emerged from the Communist era. But our member companies have great skills, and our industry has embraced the liberalised market. We believe that the Romanian railway sector has embraced the European ideal of liberalisation, and around 85% of our supply industry is in private hands, with just a few strategic businesses remaining under the umbrella of the state. Even among operators, 30% of freight traffic is now in private hands.

So, clearly, the industry is young and it is changing - and the biggest challenge we face is reshaping the image of the railway in general in the eyes of the public. Traditionally, we have always viewed the transport sector in terms of social needs; we were not accustomed to talking about the railway as a business. This attitude remains a problem - even the government considers spending on the railway as a form of social subsidy. This is not the case for road traffic, which the government sees as an investment. The same should be true of rail ?investment, which we believe would enhance Romania’s national economy and its competitive position in Europe. Our biggest challenge then is to get the necessary funding to develop, not merely to consume through subsidy. Eventually, our members will also see some of this money as the industry grows.

What is the current status of the long-planned privatisation of the state railway’s freight business CFR Marfa (RG 3.07 p155)?

The privatisation is still under review. We have consultants looking into the best method for undertaking the sale of the business, but there is a potential obstacle on the horizon in the form of parliamentary elections at the end of November. As we have seen elsewhere in Europe, notably in Germany and also in Hungary, this may well cause a delay to the project.

What do you hope to achieve by bringing a Romanian industry grouping to InnoTrans for the first time?

First of all, it is for visibility, because, having been through a long and complex privatisation process, our members want to show that once again we are capable of working together. It is a question of partnership and the provision of complementary products, both between Romanian companies and of course with foreign partners.

If I may draw a parallel, we like to compare our industry with the British one, in the sense that both are heavily influenced by the private sector, and many of the old monopolies have been swept away in recent years. In Romania, we have a lot of very small suppliers in the private sector, and the AIF has an excellent relationship with its UK counterpart, the Railway Industry Association, which encouraged us to form our own association in the first place. AIF is built very much along the lines established by RIA - because, despite the obvious differences in GDP and the wider economies, the two railways have followed a similar developmental path towards greater fragmentation and a major separation of infrastructure and operations. Coming to InnoTrans as one group helps to bring together many smaller players who perhaps would not otherwise be able to market their services internationally, and of course it showcases the full range of capabilities across all facets of the rail sector.

In terms of target markets, nobody is putting any limits on the geographical regions we are interested in. For example, there was a tradition of supplying Romanian rolling stock to the Middle East and North Africa, and to some extent that still exists. We have had enquiries here about services we can provide for the Iranian market. We also want to work with the European supply industry to offer European standard products, but not necessarily to European customers.

You have spoken openly about your aspirations to see Romania connected to the European high speed network. How do you envisage Romania achieving this dream? What is the status of other upgrade work across the country?

The high speed line project in Romania started officially last year. It is a joint project being led by the governments of Hungary and Romania to connect Budapest and Bucuresti with the high speed network in Austria. We are following the Europe-wide trend towards high speed rail, and I can assure you that we were very upset to see a high speed map drawn up that ends in Wien, with a potential extension to Budapest. Why should we be left out of the club?

So the government and CFR SA, the infrastructure manager, drew up a plan to create a high speed corridor to the capital. But we are only in the very earliest stages of development. There is an agreement in place between our government, Hungary and Austria to fund a feasibility study to see what the optimal route for such a line might be. But the plan envisages a genuine high speed line for operation at between 300 and 350 km/h.

AIF is of course supporting this project, but it is a long-term vision - certainly it will not be realised for at least 20 years, not least because at a price of perhaps €15m to €20m/km over 800 km, it is a huge project. In terms of the high speed line, everybody speaks about a seven year timeframe - but nobody knows when those seven years will begin!

In the more immediate future, there are other priorities, such as upgrading our major domestic inter-city routes for 160 km/h throughout, which is also going to cost a large amount of money. Many of these projects were conceived in the 1990s and are ongoing, and we are focused on delivering the upgrades to our sections of the trans-European corridors. CFR expects to complete the upgrade of the route between Constanta and the Hungarian border west of Arad by 2013.

This project would also allow the development of a vital east-west artery for freight traffic. The freight forwarding sector in Romania is keen to develop the capacity of the port of Constanta to enable it to become one of the key import hubs for the whole central and eastern European region. The port authority is currently increasing its container handling capacity and, fortunately for us, it has the advantage of allowing freight forwarders to avoid the congested shipping lanes of the Atlantic and the North Sea to access a large inland area extending to a radius of around 1 000 km, including cities like Wien and Warszawa. This is a huge opportunity for the railways, so let us hope that the 2013 timescale for the route upgrade can be maintained.

Do you see the raft of European Union legislation that the Romanian railway has to comply with as a benefit or a hindrance to the industry?

The legislation offers great potential for us because, firstly, it opens up the market. Ultimately, it creates the opportunity for everyone to do business, whether from Romania or not. At times it is difficult for some of our members to keep pace with the level of investment required, particularly for major projects. But if we learn how to draft projects appropriately, we can access funding support for investment.

This is especially true for the rolling stock sector, where EU support has been used by other railways in eastern Europe to upgrade coaches and multiple-units. We also have the example of CFR Calatori’s Desiro DMUs to show the travelling public that we have a new image, a more modern and aspirational image that will encourage them to travel by rail. This reinforces the need to change public perception of the railway to help it to compete with the ?private car.