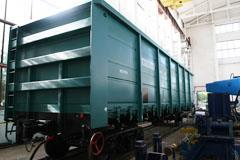 RUSSIA: Testing has begun of prototype 18-9855 Barber S-2-R wagon bogies produced at the Tikhvin Railway Car Building Plant, which is being developed by ICT Group to introduce international technologies to the Russian wagon market. The bogies are designed for 25 tonne axleloads, and follow the 18-9810 bogies designed for 23·5 tonnes.

The Barber S-2-R was developed by Standard Car Truck, now part of Wabtec. TVSZ hopes it will extend maintenance intervals for Russian wagons to 1000000 km, and allow empty vehicles to run up to 40 km/h faster. They will cost the same as the domestic 18-100 but will have half the life-cycle cost, according to Managing Director Alexey Aleshin.

ICT Group is investing $800m developing the 'knowledge-intensive, high-technology' TVSZ plant on a former Transmash site 200 km east of St Petersburg (RG 10.08 p775). Commercial production will be underway by early 2011, and the plant could eventually employ up to 3500 people manufacturing open, hopper and container wagons to four designs developed by Starfire Engineering & Technologies of the USA and Russia's Engineering Centre of Railcar Builders.