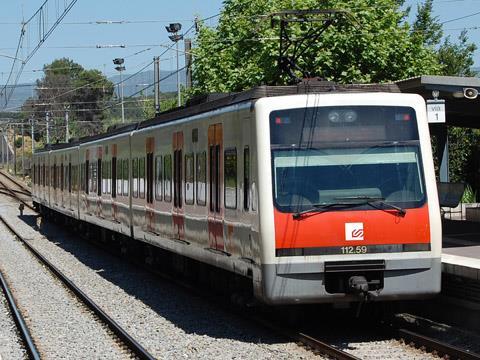 SPAIN: On November 3 the board of Ferrocarrils de la Generalitat de Catalunya approved a €155m contract with Alstom and CAF for 24 Class 113 four-car electric multiple-units. They will enter service on the Vallès suburban network in Barcelona from the second half of 2013.

The 1 435 mm gauge trains will replace 20 obsolete three-car Class 111 units and provide an increase in capacity on the Vallès routes, where ridership is predicted to increase by 30% over the next 10 years.

A further order for 20 trains may follow, which with existing Class 112 units would give the Vallès network a total fleet of 66 units to enable FGC to operate up to 40 trains/h in 2015.

The new four-car EMUs will be 80 m long, with 12 doors per side and wide gangways between the aluminium-bodied cars to give a total capacity of 800 passengers. Operating from 1·5 kV DC overhead, they will have AC traction motors and will be equipped for regenerative braking.

The interiors will have passenger information systems and air-conditioning. As well as being stored onboard, CCTV images will be streamed to the FGC control centre.