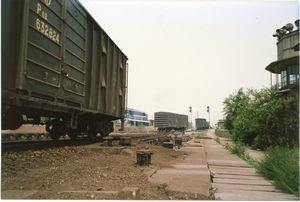 Li Hong-Chang, Associate Professor, School of Economics & Management, Beijing Jiaotong University. This article is based on a paper delivered by Li Hong-Chang and Rong Chao-He at the 8th World Congress on Railway Research in Seoul.

Significant improvements in productivity and performance have been achieved by Chin­ese Railways in the Urumqi region, following the introduction of Lean Production management tech­niques.

After an initial small-scale experiment at Hami in 2002, Urumqi Railway Bureau implemented Lean Production techniques across the whole of its area between 2005 and 2007. The initial results have proved very promising, and the concept is expected to be introduced elsewhere on the Chinese Railways network over the next few years.

Lean Production emerged in the early 1990s as a socio-technical approach to improving production management, operational performance, supplier co-ordination and customer satisfaction. The concept has its roots in the Kanban management methods pioneered by Japanese firms such as Toyota in the 1950s, and encompasses tools such as flexible operation, team working and a flatter organisational structure, along with just-in-time delivery and reduced inventory. Activities that do not add value to the final product such as excessive production, unnecessary transport of materials, or delays between production stages, are eliminated by simplifying the core business processes.

Lean Production also aims to encourage employee inititative by delegating management responsibility and encouraging people at all level to take more control over their activities. This requires clear processes for performance evaluation, as well as clarification of the responsibilities and rights of different departments at the outset. The overall objective is to achieve a lean and efficient business with a culture of continuous improvement.

At first glance, it is not immediately obvious that Lean Production can be transferred from a manufacturing environment to a railway, which is a more service-oriented business. But in fact the method has much to offer in terms of reducing costs, improving customer satisfaction and helping to build core competences at both managerial and operational levels.

In economic terms, rail provides an intangible spatial movement. Passengers and freight shippers are looking for seamless transport from origin to destination. Timeliness is critical, and users may be willing to pay more for an effective, reliable and fast service. At the same time, many different resources must be brought together to deliver a range of services, leading to a complex allocation process. This needs to be reflected in the organisational structure and management systems.

Furthermore, rail operates in a geographically diverse environment, where the quality of service can be impacted by climatic conditions, such as wind, sand, rain or snow, or other uncertainties, not to mention accidents and external incidents. In an open market, transport demand can fluctuate greatly, making it difficult to optimise the production process. And reflecting the vital role that rail plays in the national economy, China's railway industry still operates under strong government control, bringing yet more external influences.

There are many areas in which Lean Production can be applied to railways. Amongst the most obvious are:

Performance. Simultaneous prod­uction and consumption mean that it is not possible for a railway to produce in advance and sell its services later. But optimisation of timetabling and train diagramming can enable an operator to improve performance, perhaps changing service patterns to reflect demand. Service densities can be increased, average wagon loadings improved, and locomotive productivity addressed.

Co-ordination. The complex nature of rail transport involves many different working units, a broad management span, and complicated activity chains. Using operational methods such as modularity and standardisation, it is possible to clarify the responsibilities and rights of different functions, identify core business processes and optimise the use of resources.

Uncertainty. Railway operations frequently involve a lot of uncertainties, driven by environmental, market, technical and human factors. All of these can result in disruption to predetermined operating plans. Using Kanban management techniques and teamwork, better maintenance and technical processes can help to improve just-in-time performance, establish standard responses to common causes of disruption, and help the railway respond to incidents more effectively.

Economies. Harnessing network economies can make rail more efficient and cost effective, such as focusing on making better use of existing capacity. In particular, the average cost of transport will fall as the density of traffic on a line increases, expressed in terms tonne-km per km of route. It is also possible to make more productive use of locomotives and rolling stock through better utilisation.

Some form of index is needed to evaluate, reward or penalise staff or production unit performance. But to achieve a meaningful incentive mechanism, it is important to break down aggregate tasks, clarify responsibilities, and make operational norms clear and enforceable. Key performance indicators could include the proportion of non-stop trains operated, the number of temporary speed limits or the frequency of equipment failures. Choosing the right KPIs makes it easier to control and manage resource allocation in terms of productivity and overall transport efficiency.

Following initial trials, Chinese Railways selected the Urumqi Railway Bureau for a full-scale trial of Lean Production techniques, which were rolled out over two years from mid-2005. URB began by categorising its resources into four main areas:

URB used train flow as its primary performance measure. The dispatching centre was put at the heart of the new organisation (Fig 1), and given vertical management rights. Under its leadership a dedicated Lean Production office was established to analyse the production indices, establish performance standards and recommend changes to operating methods.

As a first step, all of the railway sub-bureaux were abolished in March 2005, and their responsibilities re-allocated. A tier of 'station zones' was established to provide a co-ordinating role between the head office and the local stations. Individual stations and depots were also given more rights to develop their own operating rules and assess their own performance.

The first steps to implement Lean Production at headquarters began in January 2006, and the first proposals for efficiency improvement were issued in May of that year. The Urumqi West station zone was reorganised in June, and that at Kuerle in August. A co-ordination meeting for independent siding operators in the Kuerle area was held in December 2006, followed by consultation on further streamlining measures in the first half of 2007.

At the same time a review was commissioned into the restructuring of operations at Alashankou, the break-of-gauge point on the Kazakhstan border, which is handling increasing volumes of international traffic.

Changes to loading procedures at freight terminals were announced in mid-2007, along with more non-stop freight trains. July 2007 saw the launch of an integration plan for the Urumqi North traffic control zone. The process was largely completed with the reorganisation of freight train loading at Urumqi West and changes to the wagon inspection regime.

Resource integration is critical to improving structural and operational relationships in the transport chain. URB found that it was possible to reduce the number of organisations in the operating process by integrating them into larger multi-disciplinary teams. Station, yard and siding managements were merged, dispatchers given responsibility for larger areas, and the operations and maintenance departments were consolidated.

Bringing together separate allocations of resources generated economies of scale. For example, integrating the resources allocated to Kuerle into a common pool for the whole region allowed the number of shunting locos to be cut from 4·5 to 3, increasing the utilisation from 60% to 90%.

As another example, in a widely spread region, it was difficult for the railway bureau to allocate resources accurately to match the fluctuating demand for freight loading and unloading at different stations. Within the boundaries of the Urumqi region, there are 601 sidings belonging to other organisations, of which only 164 are regularly active, loading and unloading an average of 4·2 wagons a week, or just 7·6 tonnes per day. Consolidating some of these activities at larger terminals improved the efficiency and productivity of freight handling, and at the same time reduced the amount of shunting required.

Process re-engineering helped to streamline tasks such as train marshalling and operation, vehicle and infrastructure inspection and maintenance, eliminating duplicate functions and activities which contributed nothing to the overall transport value.

As an example the freight department had been responsible for examining the condition of wagon loads, while the wagon department inspected the running gear. But the two groups did not co-ordinate their findings in order to ensure that wagons were in a fit condition before they were loaded. Now the two departments have been consolidated, both the loading condition and running gear are checked as a single activity, reducing the workload and also minimising the need to re-load defective vehicles.

By adopting Lean Production, URB has been able to better integrate its transport resources and relate its operations more closely to the needs of its main customers. Following the process of resource integration and moves to optimise the organisation structure, including the creation of the station zones, the performance indices such as tonnage handled, locomotive and wagon productivity, operating revenue and costs have all improved significantly (Table I).