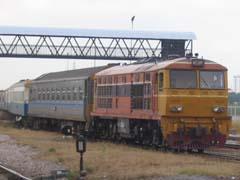 THAILAND: Construction of a 750 km standard gauge line from Bangkok to Chiang Mai is the largest single project included in a 400bn baht programme of infrastructure investment announced by the government on January 10.

Comprising 128 different work packages for completion by 2016, the programme includes a range of other public transport, road and flood defence schemes. A total of 230bn baht has been earmarked for railway projects in the north of the country, including double-tracking of up to six sections of State Railway of Thailand’s existing metre-gauge network.

Whilst the government is reported to have requested technical assistance from Japan to help design the line to Chiang Mai, China is likely to be heavily involved in both funding and construction. A wide-ranging agreement between the two governments covers development of up to four standard gauge lines for operation at speeds of around 200 km/h.

Meanwhile, double-tracking of SRT’s 78 km line between Chachoengsao and the eastern port of Laem Chabang was completed on January 12, marking a further milestone in the national programme. Transport Minister Sukumpol Suwanatat said the upgrading would allow a doubling of rail traffic from the port to 800 000 TEUs per annum. SRT is expected to operate up to 32 container trains per day, although this could increase to more than 60 if it is able to source more serviceable locomotives.

Suwanatat also confirmed the government’s ambition to invest in more rail capacity for intermodal traffic to develop Laem Chabang as a logistics hub for the Asean region. A trans-peninsula rail landbridge is planned to connect the east coast port at Songkhla with Pak Bara on the west coast to avoid the circuitous maritime navigation via the Singapore Strait. In the longer term, a cross-border line to Dawei in Myanmar is also envisaged.