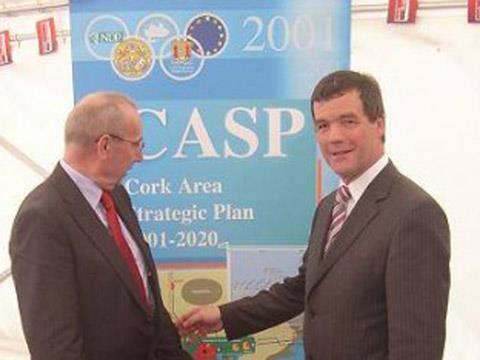 IRELAND: A full commuter service between Midleton and Cork began on August 4, following the inauguration of an introductory service on the re-opened line by Minister for Transport Noel Dempsey on July 30.

The minister had launched the €75m rehabilitation of the 10 km Glounthaune - Midleton section of the mothballed line to Youghal in February 2008. The project forms part of a €130m investment in Cork commuter services within the national Transport 21 programme.

Level crossings on the single-track line have been replaced by bridges, and stations with extensive car parking provided at Carrigtwohill and Midleton, which is predicted to double in population by 2020.

The journey time between Midleton and Cork is 24 min, with Iarnród Éireann's hourly off-peak service increasing to every 30 min in the peaks. Provision has been made for trains to run every 15 min if demand grows, with trains lengthened from two to four-car sets.