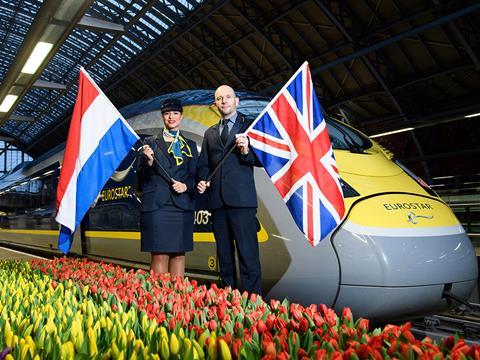 The announcement follows the conclusion earlier this year of negotiations between the Dutch and British governments to allow border control and security checks to be undertaken at Amsterdam CS and Rotterdam Centraal stations. On July 7, the Netherlands was formally added to the 1993 agreement covering Belgium, France and the UK allowing the introduction of these juxtaposed controls. This removes the need for passengers travelling from Amsterdam and Rotterdam to change trains at Brussels Midi to pass through security.

Eurostar says that it expects to offer a journey time of 4 h 9 min between Amsterdam CS and London, and 3 h 29 min from Rotterdam. An initial two trains per day will operate, with a Eurostar spokesperson telling Railway Gazette International that the operator ‘hopes to increase services next year’. The trains will carry intra-Schengen area passengers between Amsterdam and Brussels.

The introduction of the service comes amid significant uncertainty because of travel restrictions relating to the coronavirus pandemic. Currently, any passengers arriving in the UK by Eurostar are required to self-isolate for 14 days. As a result, Eurostar says that it will offer more flexible booking options, including accepting changes to any booking at no cost up to 14 days before departure.

Eurostar has confirmed that the launch of the Amsterdam – London service is not contingent on the relaxation of UK quarantine rules, although the company is ‘monitoring the situation closely’.