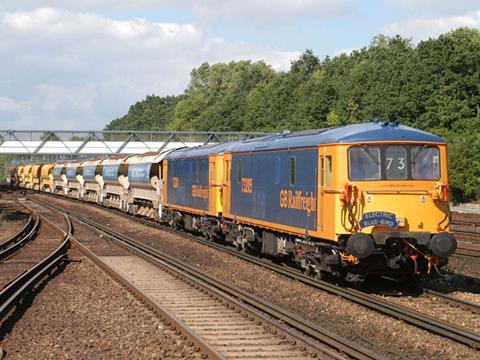 EUROPE: Groupe Eurotunnel’s freight operating subsidiary Europorte has bought UK operator GB Railfreight from FirstGroup for £26∙3m in cash. Announcing the acquisition at a press conference in London on June 1, Eurotunnel Chairman & CEO Jacques Gounon said that the deal was ‘a strategic move to boost our rail freight business’ following the integration of Veolia Cargo’s French operations, which Eurotunnel acquired in December 2009. Gounon stressed that, by adding a UK-based freight operator, the group could now develop a ‘bi-national rail freight market’ which together would be the second largest in Europe behind Germany. GBRf currently has around an 8% share of the UK market, which includes a strong presence in the power station coal (around 15%), intermodal and infrastructure services segments. The GB Railfreight name and management team would be retained, Gounon said, as he paid tribute to Managing Director John Smith’s work in growing the business since its creation in 1999. Eurotunnel expects the acquisition to provide a long-term boost to Channel Tunnel freight traffic by reducing customers’ reliance on what he termed ‘state-backed’ competitors Fret SNCF and DB Schenker. ‘For various historical reasons, these companies have failed the market,’ he claimed. Rejecting suggestions that Channel Tunnel freight access charges were still too high, Gounon argued that he would challenge perceived anti-competitive practice in the UK which was restricting traffic growth. He cited DB Schenker’s control of Dollands Moor yard at the entrance to the tunnel and the same company’s ownership of the spares pool for Class 92 locomotives. Europorte owns 11 of these multi-system electric locomotives — the Class 92 is currently the only type approved to haul trains both through the Channel Tunnel and on Network Rail. GBRf Managing Director John Smith was ‘excited’ by the prospect of working with Eurotunnel, insisting that ‘we have retained our independence and our privateer ethos.’ He added that he felt GBRf had never been at the strategic core of passenger rail and bus operator FirstGroup, but the change of ownership would allow the company to focus on adding more volume from existing customers in the short term. In the future, Smith was optimistic that ‘reliable haulage’ through France could generate new business from shippers in the Netherlands and Germany.