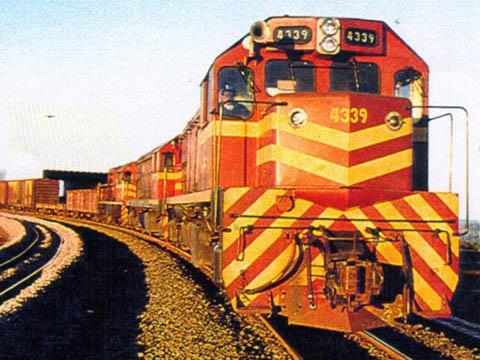 This year will be a decisive time for Ferroeste, as we press ahead with our long-term expansion strategy. By the end of the year, we expect to have completed all the technical and environmental studies for a series of extensions and new branches which are due to be completed by 2015 at an estimated cost of around US$1·5bn. These will add more than 1 200 route-km to the railway, which is currently just 248 km long. The line now runs from Cascavel in the southern Brazilian state of Paraná to Guarapuava, from where existing railways take the traffic to the ports of Paranaguá and Antonina, in Paraná, and São Francisco do Sul, in Santa Catarina.

When completed, the new lines will connect the states of Paraná, Mato Grosso do Sul and Santa Catarina, as well as Paraguay, with the Atlantic Ocean. Between them, the three states currently generate 20% of all Brazilian agricultural production, and the annual demand in the area served by the new lines is projected to reach 20 million tonnes per year. Of this the demand from the Paraná region alone is 12 million tonnes, or more than twice the carrying capacity of the current line which is around 5 million tonnes a year.

Estrada de Ferro Paraná Oeste SA is a public-private company partially owned by the state government of Paraná. The first stage of the railway was built by the state government, and the US$363m cost was funded by the state. This public investment has already helped to reduce the cost of transport, improving the income of farmers and industries, including small and medium-sized companies, and, generating economic and social development in Paraná.

The extension plans are being backed by Paraná, in co-ordination with the governments of the other states and with the support of the federal government, which has made it one of the priorities for national infrastructure development. A number of other stakeholders — both public and private — are also playing an active role in the process.

Work is already underway on the next stage of the railway, which runs for 170 km from the current railhead at Cascavel to Guaíra on the banks of the Paraná River near the border with Paraguay. This section runs through an area of intensive grain production, generating crops for export through the port of Paranaguá, which is already the busiest grain port in Brazil. As well as reducing transport costs for the export traffic, the line will also carry inward traffic such as fertilisers and equipment.

After crossing the river, the new line will continue northwest for a further 270 km in the state of Mato Grosso do Sul. Passing through Dourados, it will run to Maracaju, where it will meet the América Latina Logística branch from Campo Grande to Ponta Porã on the Paraguayan border. The connection at Maracaju will allow traffic to and from Bolivia at Corumbá to reach Paranaguá, a distance of 1 700 km which is easier than the current 1 500 km road haul through the Andes to Pacific ports.

Onward connections beyond Maracaju would link Ferroeste with the railways of western central Brazil, and the Ferrovia Norte-Sul, opening up new access routes to the heart of the country.

The extension to Dourados and Maracaju is being planned through a strategic partnership with Petrobras Transporte SA, which is the country’s largest transporter of oil and natural gas. Transpetro has identified a potential demand for around 4 million m³ of ethanola year from the state of Mato Grosso do Sul to be exported through Paranaguá from 2011 onwards.

Another branch will run southwest from Cascavel to Foz do Iguaçu, also located on the bank of the Paraná River close to the borders with Paraguay and Argentina. Construction of this 170 km branch is strongly supported by partners across the continent as part of the co-called ‘bio­ceanic’ railway corridor across South America, connecting the ports of Paranaguá in Brazil and Antofagasta in Chile. A political decision to create this corridor was taken by the presidents of Brazil, Paraguay, Argentina and Chile. At a meeting in Buenos Aires in May 2008, it was agreed that the line should be operational within five to 10 years.

Much of the railway already exists, and only 470 km of new line is needed to link up the corridor. Ferroeste has already invested US$4m to complete engineering design for the 170 km section between Cascavel and Foz do Iguaçu. This only leaves the 300 km paralleling the Paraná river through Paraguay and Argentina to Barranqueras, from where the line already exists through Salta and Socompa to Antofagasta.

To serve the southern part of Paraná and the western section of Santa Catarina state, Ferroeste is now looking at building a branch to Chapecó, an important meat production centre in the west of Santa Catarina. This would be around 300 km long, diverging from the existing main line at Laranjeiras do Sul, about mid-way between Guarapuava and Cascavel.

The Chapecó branch is intended to serve Santa Caterina’s meat industry by reducing the cost of feedstocks, mainly corn from Mato Grosso do Sul and western Paraná. The line would also carry processed meat products moving out in refrigerated containers for export.

With all of these extensions forecast to generate considerable volumes of traffic, their opening will put pressure on the existing railway between Guarapuava and Paranaguá, which is already suffering from a shortage of capacity in places. The biggest bottleneck is the former Rffsa line between Guarapuava and Ponta Grossa, which is owned by the federal government and currently operated by ALL, along with the tortuous route through Curitiba on the line leading down to the coast.

Ferroeste has therefore completed an initial pre-feasibility study for construction of a direct line between Guarapuava and Paranaguá, which would be around 365 km long. This would reduce the distance between Cascavel and Paranaguá from 738 km to 613 km. But more importantly, by solving the bottlenecks in the production flow, it would shorten the train cycle time from around eight days now to just 36 h.

A technical feasibility study for the new line has been submitted to the Ministry of Transport, and strategies for financing the construction of the route are now under discussion. Private-sector investors have already expressed interest in the project. The estimated cost is put at R$985m (around US$500m). The line could also benefit from financing through the National Bank for Social and Economic Development (BNDES), as the project forms part of the national strategy to increase rail’s modal share, as set out by the federal government in the National Plan for Transport (Pnlt) and the Growth Acceleration Programme (PAC).

As the only public-sector freight operator in Brazil, Ferroeste is strongly focused on its primary function of supporting economic and social development. By offering lower rates and subsidies for small and medium producers, Ferroeste aims to provide cheap transport to meets the demands of a large flow of grain from the regions it serves, and reduce the current dependence on trucks.

To this end, Ferroeste and the Paraná state government have launched an innovative programme to underwrite the construction of 500 new wagons, which will be made available for sale to shippers at a lower price thanks to the economies of scale. Winning bidder was Amsted Maxion, which has been selected to supply 100 gross tonne hopper wagons for around US$100 000 each.

Meanwhile, on March 16 Ferro­este announced the start of a procurement process to acquire seven second- hand diesel locomotives rated at 3 000 hp. These will replace its existing 1 600 hp locos which are technically obsolete. We expect the new locos to improve operating performance, as they will be able to haul trains of up to 65 wagons compared to only 32 at present. Fuel consumption will be reduced by an estimated 40%, offering an annual saving of around US$1·5m. The new loco-motives are also expected to reduce maintenance costs by nearly 60%.

With the reduction in operating costs promised by the replacement locomotives and arrival of the new wagons, Ferroeste will be able to increase its performance and lower its freight rates, helping to reduce production costs and improve economic competitiveness throughout its area of influence.