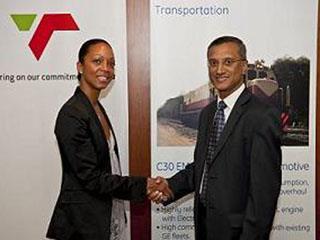 SOUTH AFRICA: GE Transportation announced the signing of a contract with Transnet Ltd to supply Transnet freight Rail with 100 C30ACi freight locomotives on December 18. Deliveries are scheduled for 2011-12. The manufacturer says they will be the first diesel-electric locomotives with AC traction equipment in sub-Saharan Africa.

GE Transportation's Erie plant will produce 10 complete locomotives, while 90 will be supplied as kits for assembly by Transnet Rail Engineering as part of the South African government's Competitive Supplier Development Programme which aims to encourage industrial development.

EMD, GE Transportation and Siemens had been invited to bid for the contract. An earlier tendering process had selected EMD and Sibanye Trade & Services as preferred bidder to supply 212 locomotives, but was cancelled after Transnet found 'procedural irregularities'.

There are about 1 200 GE locomotives in Africa, according to the manufacturer, including around 900 in South Africa.