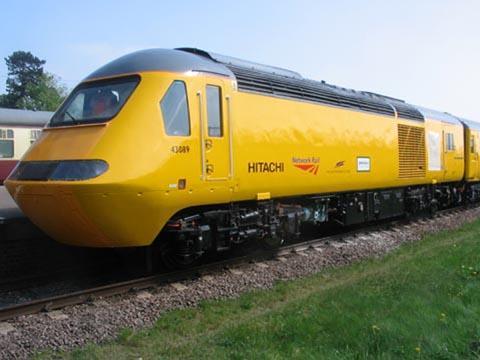 The hybrid drive has been installed in a British HST power car to allow realistic trials of the prototype technology, which Hitachi and its development partners Brush Traction, Network Rail and Porterbrook Leasing anticipate could reduce fuel consumption by 20%.

The hybrid train accelerates from a stand on battery power alone, with the energy management system blending in power from its Paxman Valenta diesel engine as the speed reaches 30 km/h. During braking the traction motors act as generators, with the energy charging the battery rather than being dissipated as heat. Allowing for energy losses in charging and discharging, Hitachi expects that around 80% of the regenerated braking energy will be recovered for the next powering cycle.

Power car No 43 089, now named after the Japanese word for falcon, and a MkIII TGS coach were donated to the project by Porterbrook. Modification of the vehicles was undertaken by Brush Traction in Loughborough. Limitations on weight distribution prevented the bank of 48 lithium ion battery modules rated at 1 kWh each from being fitted in the power car, so the battery is located in custom-designed racks in the adjacent coach.

Hitachi is expecting a 20% cut in fuel consumption, but higher savings could be made with a new-build vehicles. These would have the batteries incorporated in the design from the start, with the 20 kg battery modules distributed throughout the train. Using battery power for acceleration means that a new-build vehicle could have a smaller diesel engine and cooler group, resulting in an overall reduction in vehicle weight despite the battery. Further reductions are expected as battery technology advances, driven by demand from the automotive industry. 'The weight saving is marginal today, but might be significant in a couple of years' said a Hitachi engineer at the launch. Battery life is put at eight to 10 years, but this is also expected to improve as technology matures.

The HST is the first use of Hitachi's hybrid system in Europe, but a prototype New Energy Train has been on test in Japan since 2003. JR-East is to begin revenue service with three hybrid DMUs in July, and their arduous commuter duty cycle with frequent station stops is expect to demonstrate higher fuel savings than the HST.

Testing of the HST has now begun at up to 96 km/h on the Great Central Railway, a heritage line, in advance of six months of testing as part of Network Rail's New Measurement Train. It is paired with a conventional HST power car to allow direct comparisons of performance and energy efficiency, and use in the NMT will require it to operate at up to 200 km/h between passenger trains. Network Rail Chief Engineer Andrew McNaughton said the NMT duty cycle is similar to that of a train in regular inter-city passenger service, which will enable Hitachi to gather realistic performance data.

The project is focused on research for the future, with train operators following with interest but no orders currently planned. 'This hybrid HST power car is a fantastic demonstration of the advances in hybrid battery/diesel technology', Hitachi Europe General Manager Alistair Dormer told guests at the launch. 'Hitachi is very proud to unveil this technology which will demonstrate energy and emissions savings today, but more importantly unlocks the future potential for the application of rapidly-improving battery hybrid-powered traction technology to future generations of rail vehicles in the UK.'