InnoTrans 2014: the railway world in one place 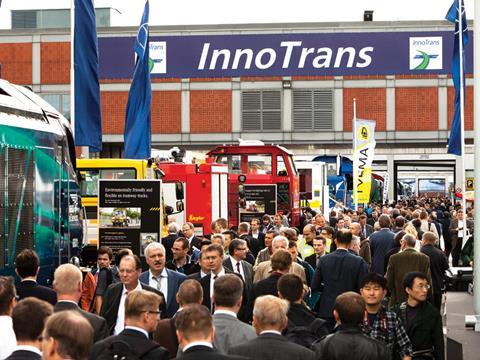 INNOTRANS: ‘Ultimately, this fair is the quickest way to obtain information.’ That was the succinct summary of InnoTrans 2014 by Dr Robert Wassmer, Chief Executive of Knorr-Bremse, as he and several of his counterparts from across the global industry gave their closing remarks on the trade show.

Although the weather was cooler and less sunny than in 2012, the crowds were not deterred. Organiser Messe Berlin confirmed its pre-show prediction of increased visitor numbers, reporting a total of 138 872 attendees from more than 100 countries over the four days. Exhibitor numbers reached 2 758 from 55 countries, with 61% of them from outside Germany. Overall, Messe Berlin suggested a 10% growth in participation from the last show, and an increase of two percentage points in the net exhibition space to a daunting 103 000 m2.

The outdoor area was home to no fewer than 145 vehicles, including several displayed in a ‘special gauge’ zone, while the organisers reported that 140 ‘world premières’ were introduced to the market over the four days.

Once again numerous contracts worth ‘many millions’ were signed during the fair, although Messe Berlin’s closing report declined to offer an update to the €1·8bn of orders recorded in 2012. Nevertheless, in the rolling stock segment there were significant orders placed by DB with Pesa for a further batch of Link DMUs, and by leasing company Junakalusto for 34 Stadler Flirt EMUs. The event was also characterised by the announcement of numerous new or extended partnerships and joint ventures in multiple disciplines from high speed operations to ETCS installation.

But as ever, perhaps the most compelling feature of InnoTrans remains its ability to facilitate interaction between all the disparate elements of the railway sector at a single event.