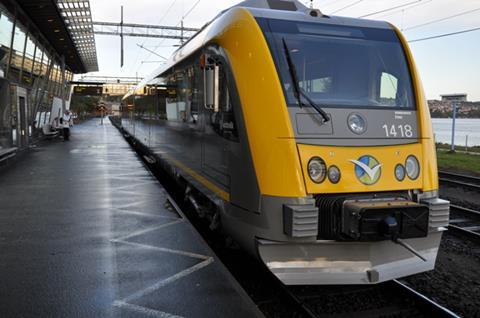 SWEDEN: Bombardier Transportation unveiled its first Itino diesel railcar equipped with C.L.E.A.N. diesel technology at the Elmia Nordic Rail exhibition in Jönköping on October 7, conducting a series of demonstration runs with the prototype train at Jönköping station. The first production trainsets equipped with the Catalyst based Low Emission ApplicatioN diesel engines are expected to enter service in both Sweden and Germany later this year.

According to the manufacturer, the C.L.E.A.N. Diesel Power Pack is the first low-emission 500 kW traction package able to meet the European Union’s Stage IIIB exhaust emission regulations which are due to come into force in 2012. It forms part of the Bombardier ECO4 portfolio of technologies for sustainable mobility, energy saving and operational efficiency.

Developed as part of a research programme that began in August 2006, the C.L.E.A.N. powerpack has undergone extensive type-testing, which has demonstrated a reduction in exhaust emissions of up to 83% compared to earlier engine types. Total mass of the powerpack and exhaust system has been reduced by 20%, contributing to lower energy consumption. A focus on minimising maintenance and repair time is expected to bring benefits in terms of increased fleet availability.

Bombardier is currently assembling four Itino trainsets with C.L.E.A.N. diesel technology for Fahma-Fahrzeug Management in Germany, and the first of these is expected to enter service in the Odenwald region near Frankfurt-am-Main later this month. A further 13 trainsets have been ordered by various operators in Sweden, with the first of these due to be delivered to Västtrafik in December 2009.