INDIA: Building a railway deep into the heart of one of the world’s most inaccessible regions is a huge challenge for the surveying, design and construction teams. 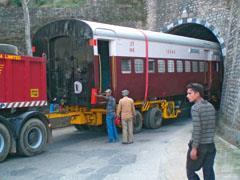 Before the present project began, no surveyor had entered the area since 1936. So when Ircon was awarded a R21·5bn contract to build a 120 km section of a 1 676 mm gauge railway from Qazigund to Barramulla in the heart of the Kashmir Valley, it was a question of starting from scratch, literally. That was in February 1999 following a study into the scheme in 1997 (RG 8.06 p458).

The Kashmir Valley line is designated a project of national importance, and the first section along the floor of the valley between Rajwansher and Anwantipora opened in mid -2006. This part of the route is isolated from the rest of the Indian Railways network, and rolling stock had to be transported from Delhi to Srinagar by lorry. Not until the line is completed from Udhampur will through services be possible.

In the meantime, the section from Qazigund to Barramulla is due to be completed by October 2008, leaving only the most difficult segment from Udhampur to Qazigund to be finished. Ircon has a share in this work, having been awarded a R21bn contract for the 47 km section from Laole to Qazigund in December 2002.

The 167 km route from Udhampur to Qazigund lies through some of India’s most inhospitable terrain. There were no approach roads, so these had to be built at an early stage in the project. Geological surprises threatened the scheme at every step, with the alignment having to pass through fault zones and several areas prone to landslips. Structures had to be designed to cope with seismic activity, while heavy snowfall was another hazard. Finding skilled manpower able to work in the area was another challenge, as were the logistics of transporting construction machinery to the worksites.

The tormented geology of the Himalayan foothills means that the alignment plays hide and seek with itself as it clings to steep hillsides, plunging in and out of tunnels and across deep gorges. No less than 70% of the Laole – Qazigund section lies in tunnel, with 23% on bridges and viaducts. Indeed, the world’s highest railway bridge is needed to carry the line 359 m above the Chenab river on a 460 m steel truss arch.

The line will also feature India’s longest tunnel. At 11 km, the Pir Panjal tunnel is located between Km 152·6 and Km 163. Work has progressed slowly but steadily because of the difficult conditions, and by the end of July 4·6 km had been completed. Another two years will be needed to complete the bore.

The rock is either very hard, abrasive or swelling, and in the middle of the tunnel we expect the overburden of up to 1 100 m to generate a squeezing pressure of up to 200 MPA; here the route lies under a ridge that reaches up to 2 900 m above sea level. In areas of limestone there is considerable water ingress, requiring careful management of the flows.

A 55 m deep access shaft with a 13 m diameter was built 585 m from the north portal to open up the main face at that end, while additional faces were opened 2·75 km from the south portal thanks to construction of a 774 m side adit. The two ends of the tunnel are 26 km apart by road.

The inaccessibility of the region required the use of unusual surveying methods. The first step was to undertake digital terrain modelling from contour maps using the latest software. The paper alignment was then reviewed in terms of the topography, and a survey was carried out up to 100 m either side of the alignment centreline. Sections that could not be reached on the ground were covered by aerial survey using remote sensing, allowing maps to be generated on a 1:5 000 scale. The aerial survey included triangulation work and the generation of ortho-photos.

A team consisting of geologists and engineering specialists then traversed the route to assess the ground for stability and to determine constructability, and adjustments were then made to the alignment. Bentley Rail software was then used to estimate material quantities from the digital terrain map, and the data was married with topographical details so that earthworks quantities could be calculated. The final step was a geophysical survey, together with drilling of ground cores and laboratory testing. With this work complete, the project was zoned and contracts were awarded — bidders with local partners were given an additional weighting, and the final awards were made on the basis of quality and cost and not on cost alone.

To see the project through to conclusion, a technical advisory group was set up. This consists of a panel of eminent engineers and experts in tunnelling and related fields who meet from time to time to review technical issues and monitor progress.

Despite all the odds, the first phase of India’s most ambitious railway project since independence is set to be operational this year. Although this phase does not yet link the Kashmir Valley to the main Indian Railways network, the completion of the 120 km stretch between Qazigund and Baramulla will soon give Kashmiris their first experience of inter-city rail travel.

As we closed the September edition for press India’s Ministry of Railways announced that work on the critical 70 km Katra - Qazigund section of the Kashmir line had been suspended. Construction teams were experiencing severe difficulties including recurring tunnel collapses, and an alternative alignment may now be investigated.