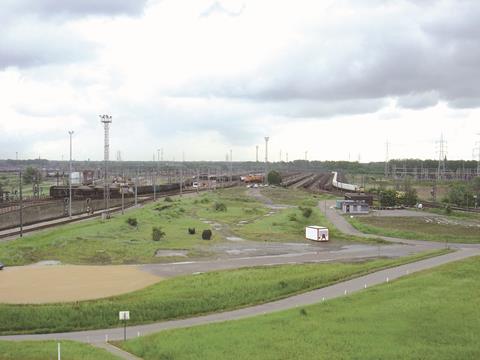 BELGIUM: Work is to start on November 12 on construction of the Liefkenshoek Connection serving the port of Antwerpen, following the signing of a PPP concession for the project. Infrastructure manager Infrabel confirmed on November 5 that it had reached financial close on the deal, under which LocoRail NV will design build finance and maintain the line.

The Liefkenshoek Connection is a major element in Infrabel’s programme to expand rail access to the port, on which the infrastructure manager has already committed expenditure of €100m to provide additional capacity between 2007 and 2020. The PPP covers the construction of a new line linking the Bundel Zuid marshalling yard and the Deurganck Dock on the left bank of the Schelde with the main marshalling yard and the port railway on the right bank. This includes the boring of two single track tunnels under the river and the entrance to the docks.

Tendering for the project began in April 2006, and three consortia were shortlisted for the final round. Infrabel subsequently awarded the DBFM concession to the LocoRail consortium, which groups CFE NV, VINCI Concessions SA, and BAM PPP Investments Belgium. Engineering and construction will be handled by the THV LocoBouw consortium, which includes MBG, VINCI Construction Grands Projets, CEI-De Meyer and Wayss & Freytag.

Capital cost of the project is put at around €680m, of which €107m is coming from the Flemish regional government. The DBFM contract covers all civil works but does not include the railway systems, track and signalling, which will be installed by Infrabel at a further cost of €75m.

Infrabel will pay an annual availability fee of €50m for use of the connection over the 38 years of the concession, after which it will assume ownership of the assets. The infrastructure manager says it will not impose any additional charges on train operators using the line, ‘in order to safeguard the competitiveness of the port of Antwerpen’.

With construction starting this month, civil engineering is due to be completed by mid 2013. Infrabel will install the tracks, signalling and overhead electrification wiring in several stages during 2012-14. Testing of the completed line should begin in spring of 2014, allowing commercial services to start in the middle of that year.

Construction of the Schelde tunnel is expected to reduce the pressure on the existing Kennedy rail tunnel and the major junction at Berchem, which Infrabel says is ‘nearly saturated’. Working with the port authority, the Flemish region and the Belgian government, Infrabel expects rail’s market share of traffic through Antwerpen to increase from 8% today to approximately 15% in 2020.