Man eating lions - not (as) many dead 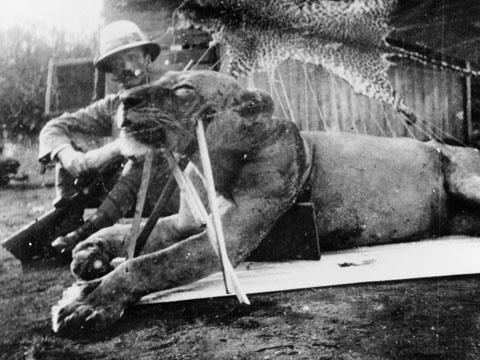 KENYA: Lieutenant-Colonel John H Patterson attributed the deaths of 135 people to the ‘man-eaters of Tsavo’, a pair of lions which terrorised railway construction workers in Kenya in 1898. The Uganda Railway hired Patterson to hunt down the lions, but thought the number of deaths was more like 28. Now scientists have suggested that the railway was closer to the truth.

After brief careers as rugs, the two lions are now stuffed and on display in Chicago’s Field Museum. Researchers analysed the carbon and nitrogen isotopes present in samples of tissues from the lions and from local prey - including people - to identify the extent to which humans contributed to the lions’ diet.

The results suggested that one of lions had eaten around 3·5 humans towards the end of its life, the other 8·1. Extrapolation of this data over the nine-month period of human predation suggests 35 people were eaten, with a 95% confidence of the total being in the range 4 to 72. The difference in consumption between the two lions is of interest to zoologists, as one possible explanation is that they each specialised in a particular aspect of hunting.

While Patterson may have embellished the scale of the lions’ hunting in his subsequent books, there is always the possibility that other people were killed but not eaten.

Co-operation and individuality among man-eating lions by J D Yeakel et al is published in Proceedings of the National Academy of Sciences.