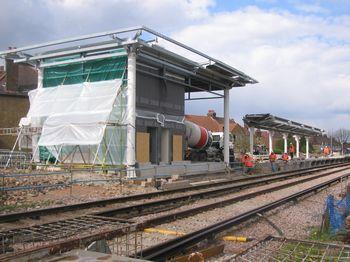 UK: The first trains are due to call at a newly-built station at Mitcham Eastfields in south London on May 19. The station is a showcase for modular construction developed in-house by UK infrastructure manager Network Rail, which is seeking an econo­mical way to build new stations or rebuild existing facilities.

The 170 m platforms are conventional structures, but the 6 m x 6 m two-storey building containing a ticket office and accessible toilet is formed from modular components prepared elsewhere for rapid assembly on-site. Compared to conventional construction methods, this approach reduced the amount of time during which train services on the busy suburban line needed to be suspended. It also minimised the disturbance to local residents. Spare components can be held to meet future maintenance or replacement needs, speeding up maintenance tasks.

The time from Network Rail's approval of the local authority's proposal for a station to the opening was around 18 months. The total cost of £6m was funded by Network Rail, including £1·4m for a footbridge equipped with lifts monitored by CCTV.