MEXICO: On May 15, the national tourism fund Fonatur awarded a consortium of Construcciones Urales, GAMI Ingeniería e Instalaciones and AZVI the third construction contract for the planned Tren Maya network, covering the 172 km from Calkiní to Izamal in Tabasco, with a bid of 10·2bn pesos. Work is expected to begin on May 25. 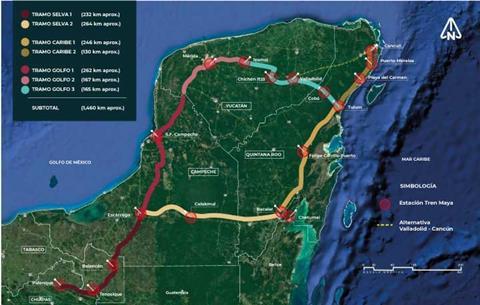 Two construction packages have already been tendered. The Senermex consortium led by Mota-Engil of Portugal with China Communications Construction Co, Grupo Cosh Eyasa and Gavil Ingeniería was awarded a 13·4bn pesos contract in April to construct the initial 227 km between Palenque and Escárcega, together with four stations. This package includes both civil engineering works and tracklaying.

A consortium of Operadora Cisca and FCC Construction was subsequently awarded a 18·6bn pesos contract covering the 244 km Golfo 1 section from Escárcega to Calkiní in Campeche. Operadora Cisca is a subsidiary of Grupo Carso, controlled by Mexico’s richest man Carlos Slim Helú.

President Andrés Manuel López Obrador announced in March that the Ministry of National Defence would be responsible for construction of the Tulum – Bacalar and Bacalar – Escárcega sections 6 and 7, totalling 541 km.

Section 4 covering Izamal – Cancún is expected to be directly awarded to ICA, which holds the Mérida – Cancún highway concession, while tenders are to be invited for Section 5 between Tulum and Cancún, where investment fund BlackRock has submitted an unsolicited proposal to the Ministry of Communications & Transportation.

Although Tren Maya has been designated as a key project on which work will not be suspended during the coronavirus crisis, the National Human Rights Commission called on May 14 for all ‘non-essential’ activities to be halted to minimise the risk to the region’s indigenous population.

The project envisages the development of 1 525 km of 1 435 mm gauge railway through the five eastern states of Yucatan, Campeche, Quintana Roo, Chiapas and Tabasco, comprising two routes connecting Palenque with the resort of Cancún serving 15 stations. Total cost is put at between 120bn and 150bn pesos, which will be funded through what the national government terms ‘a mixed investment scheme’. The network is expected to take four years to complete.