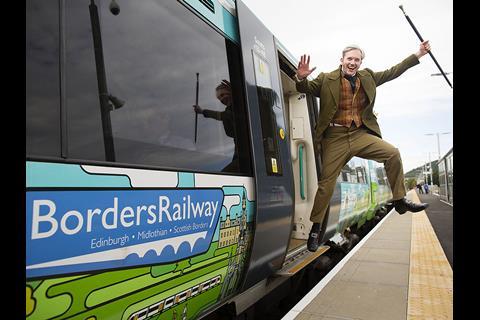 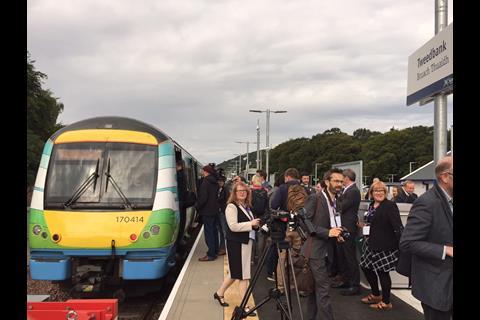 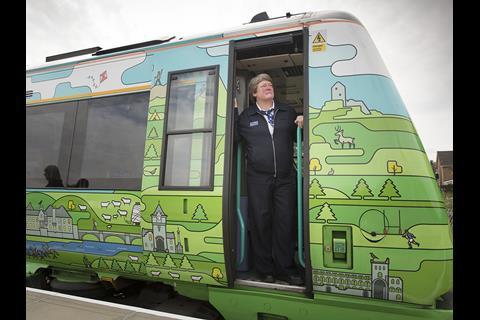 UK: The first public passenger trains for 46 years ran between Edinburgh and Tweedbank on September 6, when revenue services began over the 48 route-km Borders Railway.

The launch of revenue service comes amid a week of celebrations marking the reopening of approximately a third of the former Edinburgh – Carlisle ‘Waverley Route’ which was closed in January 1969. On September 9, a royal opening by Queen Elizabeth II at Tweedbank station is expected to attract more than 3 000 visitors.

Claimed to be the longest domestic railway construction project in Britain for 100 years, delivery of the Borders Railway has been undertaken by Network Rail on behalf of the Scottish Government at a cost of £294m; lead contractor was BAM Group. Civil works began in April 2013 and the first track was laid in the Bowshank Tunnel near Galashiels in August 2014.

The railway largely follows the formation of the former Waverley Route, requiring the refurbishment of 95 bridges and two tunnels plus the construction of 42 new bridges. Seven new stations have been built. Operator ScotRail is offering a 30 min interval service, with an end-to-end journey time of 55 min. Some steam-hauled tourist trains will be running on a trial basis until the end of October.

‘The Borders Railway is now open for business. Many people have waited a very long time to hear those words and I am proud and excited to be able to say them’, said Scottish Infrastructure Minister Keith Brown. ‘The Borders Railway will be a real catalyst for growth in the Scottish Borders and Midlothian. It will open up new opportunities for work, leisure, study and investment and business for these areas which will, in turn, benefit the wider Scottish economy.’

Brown put the government’s total investment in the railway project at £353m. This includes a range of ancillary initiatives to deliver wider economic and social benefits to the Borders region, including a £10m Borders Railway Blueprint which is intended to inform businesses about investment opportunities along the line, stimulate residential development, and fund bus and cycle links at stations to support tourism.

A detailed report on the Borders Railway project appeared in the May 2015 issue of Railway Gazette International , available to subscribers via our digital archive.