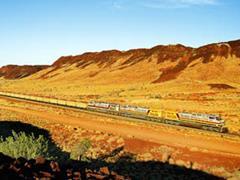 The declaration will run for 20 years from November 19, Swan announced, explaining that the process is designed 'to facilitate third party access to nationally-significant infrastructure and promote competition through the efficient operation of, and investment in, infrastructure'.

Fortescue Metals Group has been seeking access rights to use its rivals' Pilbara railways for several years, but BHP Billiton and Rio Tinto repeatedly opposed the application, arguing their railways were part of the 'production process' rather than 'services', and therefore not subject to declaration. This defence was rejected by the Federal Court in December 2006, but the then Federal Treasurer Peter Costello refused to declare the lines. Fortescue subsequently built its own railway from Cloudbreak to Port Hedland parallel to BHP Billiton's Mount Newman line (RG 7.08 p425).

In March this year FMG subsidiary Pilbara Infrastructure submitted another request to the National Competition Council to declare the Goldsworthy, Robe River and Hamersley lines, which Fortescue wants to use to reach more of its ore reserves. The High Court unanimously ruled in September that the mining companies should be obliged to negotiate access to their railways on a commercial basis. Swan agreed, adding that concerns about costs arising from third-party access would be outweighed 'by a range of benefits, including increased competition, avoiding inefficient duplication of facilities and reducing further adverse impacts on native title rights and the environment.'

Declaration does not automatically give a right of access, but it gives the third party recourse to binding arbitration by the Australian Competition & Consumer Commission if it is unable to agree access terms with the infrastructure owner.

Following the declaration, FMG Executive Director Graeme Rowley wrote to BHP Billiton and Rio Tinto seeking 'co-operation' between the three companies, and offering them access to Fortescue's line in return. Despite the recent downturn in Chinese demand for ore, FMG is keen to start developing a second mine at Solomon, about 250 km west of Cloudbreak, which would be most conveniently served by a branch from the Hamersley line.

BHP and Rio Tinto have already appealed against the High Court decision, and the Australian Competition Tribunal is expected to make a final ruling by April 2009.