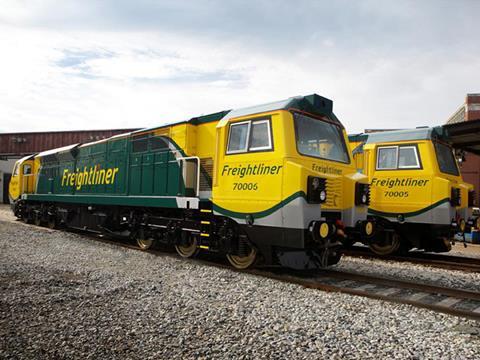 UK: Freightliner has unveiled the livery for its PowerHaul locomotives, with the four in the second batch nearing completion at GE Transportation's Erie plant in the USA.

The two PowerHaul locomotives which formed the initial batch are currently undergoing more than 170 tests including ride, gauge and electromagnetic compatibility, before being shipped from Lambert's Point, Virginia at the beginning of October. They are due to arrive at Newport in Wales at the beginning of November. The next four locomotives will be delivered in December.

Driver Production Mangers and maintenance and engineering staff are currently undergoing a locomotive familiarisation course in Erie, before returning to the UK to train Freightliner staff.

Freightliner announced its order for 30 of the PH37ACmi diesel -electric locomotives in November 2007. Now designated Class 70, they are being assembled at Erie with bogie frames supplied from Austria and engines from GE's Grove City plant.