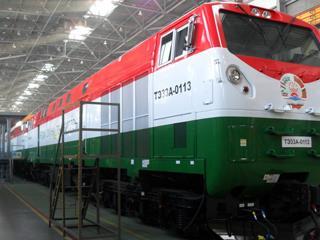 Tajikistan’s Ministry of Finance and Ex-Im Bank of China have signed a credit agreement to complete the 40·7 km Vahdat – Yovon section of the Dushanbe – Qurghonteppa line by 2016.

Indian Railways is planning to expand the use of RFID technology for wagon identification, following a successful pilot project at three locations on East Coast Railway with 500 wagons.

Siemens/Tver coaches are to be deployed on Russian Railways’ 3 217 km Paris – Moscow route from January 25. RZD says 200 000 passengers have used the service since December 2011, including 22 400 travelling between Russia and France.

Eisenbahnen & Verkehrsbetriebe Elbe-Weser is operating passenger services on the Rotenburg (Wümme) – Verden route on behalf of DB Regio, under a contract running for four years from December 14.