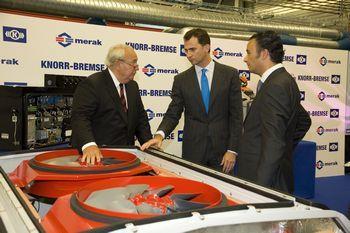 SPAIN: A factory bringing two Spanish subsidies of Knorr-Bremse together on one site was formally opened in the presence of Felipe, Prince of Asturias and Princess Letizia on June 25.

Around 500 people will be employed at the site, which has 10 000 m² of production space and 2 000 m² of offices. It also houses an air-conditioning technology development centre.

Frenos had moved to Getafe in December 2007 and Merak followed a month later, without interrupting production at either business.