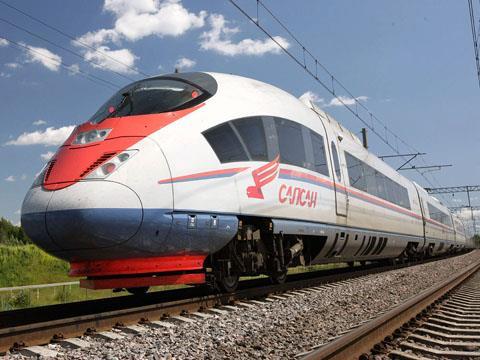 RUSSIA: 'This is not just a train and these are not just carriages, this is a different life, different technology, a different means of transport', said Russian Railways President Vladimir Yakunin before joining passengers on the first Sapsan high speed train service from Moscow to St Petersburg at 19.00 on December 17.

In November RZD had completed its 15·4bn rouble three-year modernisation of the track and electrification equipment to permit a top speed of 250 km/h, giving a fastest journey time of 3 h 45 min on the 645 km route. RZD says flying takes at least 5 h, allowing for travelling to and from the airports.

Tickets had gone on sale on November 20 and the first journey was sold out. By the time it departed a total of 18 700 tickets had been sold for travel up to January 30. The full service of three trains a day began on the morning of December 18. Each train has 21 onboard staff, who have received training in Germany and Russia based on methods used by airline Aeroflot.

The 10-car Velaro RUS trains which had been ordered from Siemens in May 2006 were awarded full federal safety certification on December 14, after an extensive test programme which involved manufacturer Siemens, Knorr-Bremse and various Russian agencies.

The vehicles have been built at Siemens Mobility's Krefeld plant, but their
1520 mm gauge and wide bodies required DB Schenker to deliver them to the port of Sassnitz by road as abnormal loads. The last of the eight trainsets was due to be shipped from Sassnitz on December 22 on DFDS Lisco train ferry Vilnius, which is equipped with broad gauge tracks.