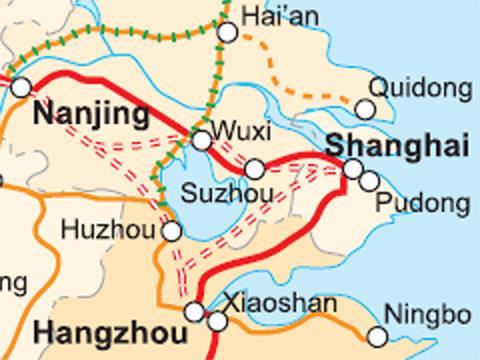 CHINA: A groundbreaking ceremony in Shanghai on February 26 marked the formal start of construction works on a 160 km passenger dedicated line which will halve journey times between Shanghai and Hangzhou to 38 min from 2011.

The line forms one side of a triangular high speed network which is being developed to give journey times of less than 2 h between Shanghai, Hangzhou and Nanjing and significantly increase capacity in the Yangtze delta region.

Work began last July on the 300 km Shanghai - Nanjing line, and construction is also underway on the 251 km direct link between Nanjing and Hangzhou.

The Shanghai - Hangzhou line will have nine stations, and is being designed for speeds of up to 350 km/h. It is being built by Zhejiang Provincial Railway Investment Group at a cost of 29·7bn yuan, with funding from the Ministry of Railways, the Shanghai and Zhejiang provincial governments and Baosteel Group, which has an 8% stake.

Around 80 million passenger-journeys are year are expected, and Yu Jian'er, General Manager of Zhejiang Provincial Railway, told local media the railway could be listed on the stock market subject to government approval.