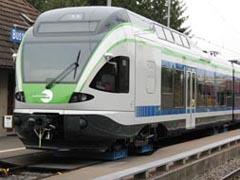 FINLAND: The first 1 524 mm gauge EMU to be built by Stadler was rolled out at the Bussnang plant in Switzerland on October 7. The four-car Flirt is part of a €190m order for 32 units placed in August 2006 by Pääkaupunkiseudun Junakalusto, a body formed by state railway VR (35%) and the Helsinki, Espoo, Vantaa and Kauniainen local authorities (65%) in 2004 to acquire and maintain rolling stock for VR's local passenger services in the Helsinki region.

The Flirt design has been extensively revised for Finland, with a wide 3·2 m body and 3+2 seating. Winterisation for -40°C includes triple-glazed windows up to twice the thickness of previous vehicles, and warm air from the passenger saloons will be used to pre-heat incoming cold air. Heater-blowers and floor heating are installed at the entrances.

Two trainsets will undergo a year of trials before delivery of the production series begins.