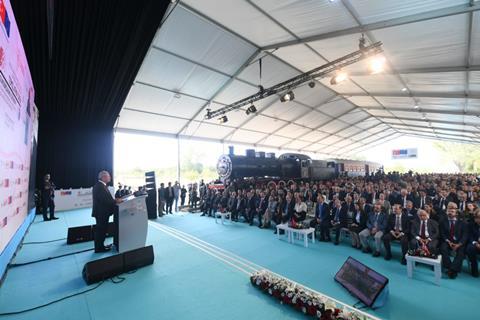 The start of work ceremony was attended by guests including EU Transport Commissioner Violeta Bulc.

TURKEY: Work on modernisation of the 233 km line from Halkalı west of Istanbul to the Bulgarian border crossing at Kapıkule began on September 25 with a foundation-laying ceremony in Edirne attended by transport minister Cahit Turhan.

The four-year project will involve the realignment of several sections of the mixed-traffic route, with extensive double-tracking and installation of ETCS Level 1. This will allow passenger services to run at up to 200 km/h.

Work packages include construction of six viaducts, two bored tunnels and seven cut and cover tunnels, as well as 24 bridges and the rebuilding of five stations and two sidings.

A contract worth €489m was initially awarded in November last year to a consortium of Alsim Alarko and Gulermak Agir Sanayi, but this offer was later ruled to have been invalid. The contract was subsequently relet in May this year to second-placed bidders, a consortium of Kolin Insaat and Salini Impregilo, which had offered €524m.

In February this year, the European Union agreed to provide €275m in grants through the Instrument for Pre-Accession Assistance funds, because the route is linked to the core TEN-T network.

The grant was awarded on condition that Turkey completes the planned rail link between Halkalı and Izmit via the Yavuz Sultan Selim Bridge over the Bosporus. Opened in 2016, the bridge already carries an isolated section of double-track railway alongside a motorway; completion of the corridor could provide a freight route bypassing central Istanbul.