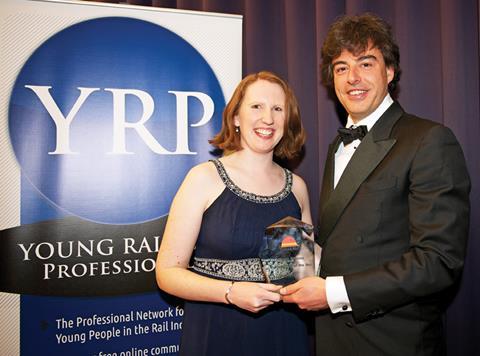 UK: The fourth Annual Dinner-Dance to be held in London by networking group Young Railway Professionals drew a sell-out attendance of more than 400 guests on March 14.

The audience heard a keynote address by Crossrail Chairman Terry Morgan, who recounted his experience of working his way up the career path across several industries in a variety of roles, having started out as an automotive apprentice.

Morgan recounted a meeting with the owner of the tunnel boring machine manufacturer Herrenknecht AG when Crossrail received the first of its eight TBMs. 'He told me that he never worried about the quality of his machinery, but he worried about where the engineers to operate them would come from in the future - and he added that British engineers are the most skilled TBM operators out there', Morgan recalled.

He then issued a reminder that overt support for major projects would be essential to sustain the training and professional development needed for young people to enjoy a long, successful career.

YRP also handed out its inaugural Young Professional of the Year award, sponsored by infrastructure contractor Colas Rail Ltd. Winner Lucy McAuliffe of Network Rail was praised by YRP Chairman Martyn Chymera for her ‘level of commitment and dedication to the railway industry’; she is a station manager overseeing a team of more than 150 staff at London St Pancras and the High Speed 1 intermediate stations at Ebbsfleet and Stratford. McAuliffe’s additional work as an assessor for NR’s Track and Train pan-industry graduate programme was also reflected by the award.

Held at the Grand Connaught Rooms in London, the event was sponsored by CPC Project Services.