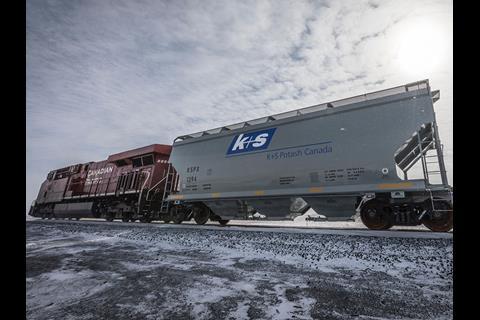 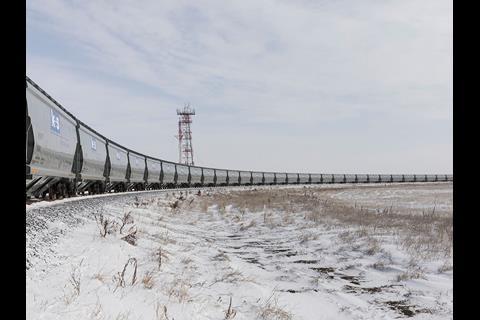 CANADA: The first 177 of 531 wagons being custom-built by National Steel Car for K+S Potash Canada have been delivered to the Legacy Project mine site in Saskatchewan.

The first batch of wagons will form one of three 3 km long trains to transport potash 1 800 km from the mine to a handling and storage facility at Port Moody, British Columbia, as well as to destinations in the USA.

The wagons have the same 105 tonne capacity as standard designs, but are slightly shorter so more wagons can be hauled per train. A single top opening enables them to be loaded while moving, and they will be unloaded automatically into a warehouse or directly onto ships.

‘The arrival of these rail cars demonstrates how close we are to production, which is expected to begin in the second quarter this year’, said KSPC President & CEO Dr Ulrich Lamp on March 13. The 531 wagons are expected to be sufficient to meet initial requirements for weekly services, but additional cars would be required as production ramps up later in the year.

The potash trains will reach Canadian Pacific’s main line using 14 km of industrial line owned and operated by KSPC as well as CP’s recently-constructed 30 km Belle Plaine subdivision. ‘The construction of the Belle Plaine subdivision is the largest single rail infrastructure project in CP’s recent history’, said CP President & CEO Keith Creel. ‘We are thrilled to be the exclusive rail provider to Saskatchewan’s first potash mine in more than 40 years, providing the most modern rail infrastructure of all of the Saskatchewan potash mines.’