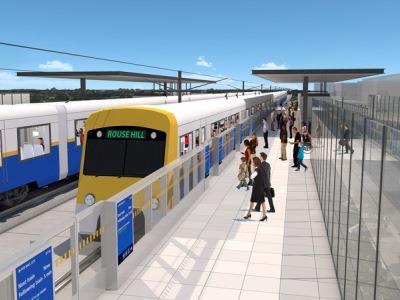 AUSTRALIA: The second of three framework contracts to build the North West Rail Link in the suburbs of Sydney was awarded on December 18.

Under a A$340m agreement with the New South Wales government, the Italian consortium of Impreglio and Salini will undertake civil works on a 4 km elevated section of NWRL between Bella Vista and Rouse Hill. The contract includes construction of a 270 m cable-stayed bridge to carry the metro line over Windsor Road, as well as other bridge and embankment works.

Expected to cost A$8·3bn in total, NWRL runs for 23 km from Epping to Cudgegong Road in Rouse Hill, of which the 15·5 km as far as Bella Vista will be in twin-bore tunnels. Once operational in 2019, it will be Australia’s first automated metro line; the driverless trains are also expected to replace double-deck suburban trains on the Epping – Chatswood line, which opened in 2009 as part of the CityRail network.

The remaining NWRL framework contract covering station construction, fit-out, railway systems and rolling stock is expected to be awarded by the end of 2014. A consortium of Thiess, John Holland and Dragados received a tunnelling contract worth A$1·15bn last June; the first of four tunnel-boring machines are expected to begin excavation work during 2014.