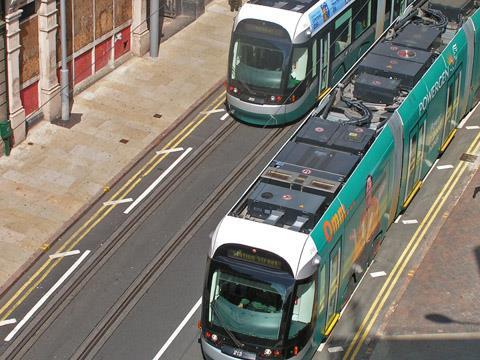 The next step is to seek Treasury approval of the business case, allowing the project team to negotiate with companies interested in building and operating the lines. The government is expected to meet 75% of the £400m cost, with the rest split between the councils; the city has proposed a workplace parking levy to generate local funding.

Construction is unlikely to start before 2011, for opening by 2014. An additional 21 trams would be required. The 7·5km 12 stop Line 2 will serve densely populated residential areas including the Meadows, Wilford/Ruddington Lane and Clifton Estate before terminating at a park & ride site near junction 24 of the M1 motorway. The proposed 10km Line 3 would have 15 stops serving the Meadows, the ng2 development site, Queen’s Medical Centre, the University of Nottingham, Beeston and Chilwell before terminating at another park & ride site by the motorway.