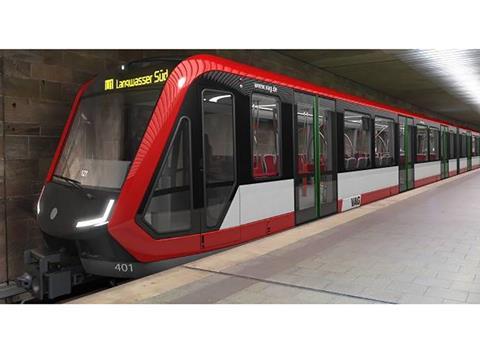 GERMANY: Nürnberg metro operator VAG intends to order 21 four-car trainsets for Line U1 at a cost of €164m.

Expected to enter service from mid-2018, the Type G1 trains are intended to replace the 42 Type DT1 two-car sets in service on U1 since the 1970s. Designed in collaboration with ergon3Design, they will feature walk-through interiors, multifunctional areas, retractable wheelchair ramps and air-conditioning.

In 2012 VAG decided that converting Line U1 to driverless operation would not justify the cost. The procurement for trains with drivers started in June 2014. However, the G1 trains will have provision for future driverless operation, as they may be required to operate on driverless lines U2 and U3.

The contract would include two options, the first of which would not be exercised before 2018. This covers six further trainsets, enabling the replacement of the 12 Type DT2 sets. The second option is for seven extra trainsets to increase capacity on the metro.

The base order would be partly financed by the city, from €21·6m that forms part of its federal allocation. The Land of Bayern is expected to provide 25% of the cost of 11 trains.