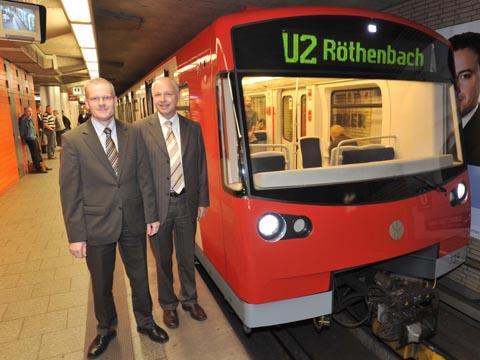 GERMANY: The first revenue services without drivers began running on Nürnberg U-bahn Line U2 on September 28. Four of the eight trains in service on U2 are now running under automatic control, and full automation is planned by January 2 2010.

The first section of U2 opened in January 1984. Subsequent extensions took the line to the airport in November 1999, and it now stretches for 13·5 km and 16 stations.

Tracks on a 3·5 km section are shared with Line U3, which has been driverless since it opened in June 2008. The common section has thus featured manually-driven trains on U2 services and automatic control on U3. This mixed operation will now be phased out in favour of full automation.

The Rubin metro automation project was launched by operator VAG in October 2001, with Siemens as main contractor for the trains and automation equipment (MR02 p11).