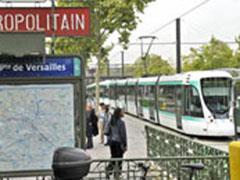 FRANCE: The 2·3 km extension of Paris tram route T2 to Porte de Versailles was officially opened on November 21. Following the ceremonies, public services began at 14.00, with free travel provided for the rest of the weekend.

The extension begins at the former terminus of T2 at Ivry-Val-de-Seine, where interchange is provided with RER Line C. Tunnelling under the RER line, the route parallels the Boulevard Périferique orbital motorway, serving the ZAC Forum district where a number of major French companies have their head offices. Intermediate stops are provided at Henri Farman - Porte de Seine, Porte de Sèvres-Suzanne Lenglen, and Porte d'Issy-Eliane Jeannin Garreau. Intended primarily to provide interchange with orbital tram route T3, the extension also offers connections with metro lines 8 and 12.

The new terminus alongside the city's exhibition centre is at right-angles to the existing Porte de Versailles stop on T3. There is no physical connection between the two routes, as T2 is operated using 2 400 mm wide cars while T3 cars are 2 650 mm wide. Both lines have been equipped with fleets of Alstom Citadis 100% low-floor vehicles.

Test running had begun in August, and since early November the line had been operating a full ghost service under normal operating conditions. The trams were running through between La Défense to Porte de Versailles, but discharging their passengers at Issy-Val-de-Seine before running empty on the extension.

Total cost of the extension is put at €92·5m, of which €36m has come from Ile de France, €19m from Hauts-de-Seine and €18m from the national government. In addition, RATP has funded an extra 10 trams to work the longer route at a cost of €19m.