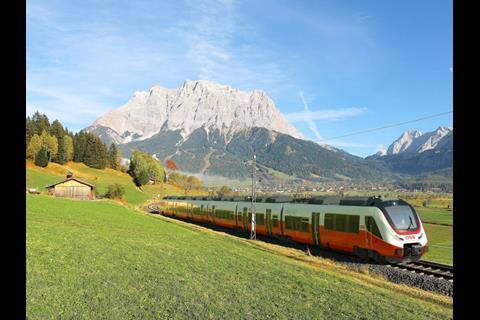 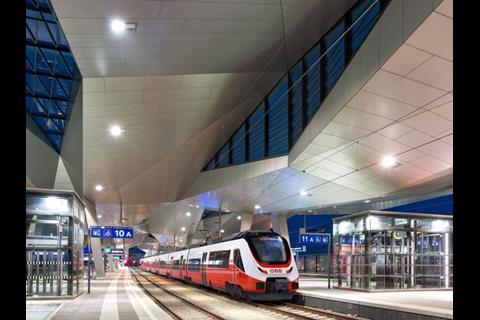 AUSTRIA: National railway ÖBB has ordered an initial build of 21 Talent 3 multiple-units from Bombardier Transportation under a framework agreement signed on December 27 which covers the supply of up to 300 trainsets for regional and suburban services.

The company had been selected in September as preferred bidder for the framework contract with an estimated total value of around €1·8bn, ahead of second-placed Stadler. A further build of the Siemens Desiro ML Cityjet design was also ruled out. A legal challenge against the decision was rejected in early December, paving the way for the contract to be signed.

The 21 regional EMUs are valued at approximately €150m. The 100 m long trains are due to be delivered in 2019 for use in the Vorarlberg region and neighbouring countries.

Launched at the InnoTrans 2016 trade fair in September, the Talent 3 is the latest evolution of Bombardier’s EMU platform. To date the company has supplied around 1 400 Talent and Talent 2 DMUs and EMUs for service in Europe and Canada, of which 187 are operated by ÖBB. The Talent 3 has a wider carbody, allowing up to 50% more seating than the earlier generation, with lower floors and wider doorways to speed up boarding and alighting times.

To be built at the Hennigsdorf plant near Berlin, the TSI-compliant Talent 3 will be equipped with ETCS as standard, allowing cross-border operation. It is being offered in several variants, with 160 km/h versions for regional and suburban operation as well as a 200 km/h design for longer-distance services. An initial order from Abellio covers the delivery of 43 units by 2020 for use on Regionalnetz Neckartal services around Stuttgart.

The platform is also compatible with Bombardier’s Primove lithium-ion battery storage system, allowing operation for up to 100 km on non-electrified routes. Baden-Württemberg will also test the prototype battery unit, which is being developed with research funding from the German federal government.

Describing the signing of the framework agreement with ÖBB as ‘a huge success’, the Managing Director of Bombardier Transportation Austria Christian Diewald said the rapid acceleration and high reliability of the Talent 3 would help the operator maintain its ‘ambitious train schedules in geographically demanding regions.’