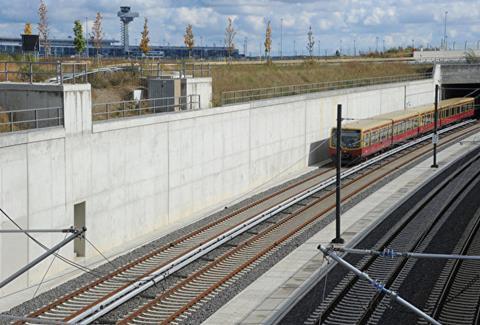 GERMANY: Berlin S-Bahn services were extended to the new Berlin Brandenburg International airport on October 26, in preparation for the start of full operations at the end of the month.

Around €675m has been invested in rail links to the much-delayed airport complex. This has seen the construction of an 18·5 km loop off the city’s outer ring line enabling long-distance and regional trains to serve a new through station underneath BER Terminal 1. The S-Bahn has been extended by 8·6 km from its former terminus at Schönefeld Airport, which itself is to be redesignated as Terminal 5, via an intermediate station at Waßmansdorf.

Operator S-Bahn Berlin has initially extended route S9 to the new airport, providing a limited 20 min frequency during the morning and afternoon only. Journey time from the airport is 52 min to Berlin Hbf and 79 min to Spandau. Route S45 is due to be extended with effect from October 29, providing a 10 min interval service all day. 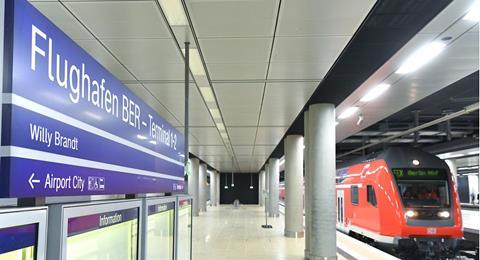 DB Regio’s half-hourly Flughafen Express service linking the airport with the city centre in 30 min is due to start operating from October 31. Long-distance and regional trains will also begin to serve the BER airport station from that date.

Regional routes RE7, RB14, RB22 will combine with the airport express to provide at least four trains/h between the airport and the city centre. Warnemünde – Berlin – Dresden IC services will be routed via the airport, offering journey times of 2 h 30 min from Rostock and 90 min from Dresden.

‘The new BER airport is closely linked to the public transport system’, said Regine Günther, Berlin’s Senator for the Environment, Transport & Climate Protection. ‘The many connections by S-Bahn, Flughafen Express, regional trains and buses will enable a fast and comfortable journey, protecting the climate and the environment, further connecting the Berlin-Brandenburg metropolitan region.’