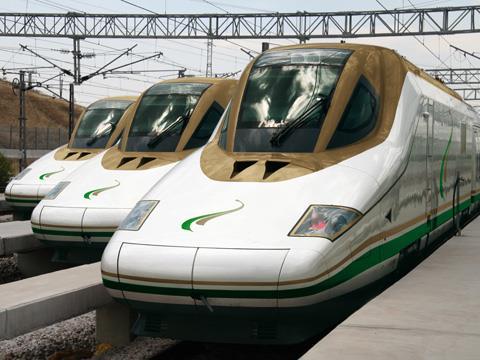 SAUDI ARABIA: Bombardier Transportation has announced contracts worth €281m to provide Mitrac 3000 traction and control packages and Flexx Power 350 power car bogies for the 36 Talgo 350 trainsets which Talgo is to supply for the 444 km Haramain High Speed Rail project.

Announcing the contracts on September 18, Bombardier said the technology for the 330 km/h trainsets would be similar to that which is used on AVE 102 and AVE 112 trainsets developed and supplied to Spanish national operator RENFE in 2001-10.

The majority of Bombardier's manufacturing for the project is to be undertaken at its plant at Trápaga in Spain. The contracts include maintenance of Bombardier's components for 12 years.