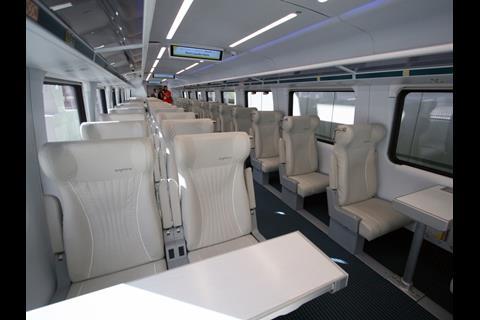 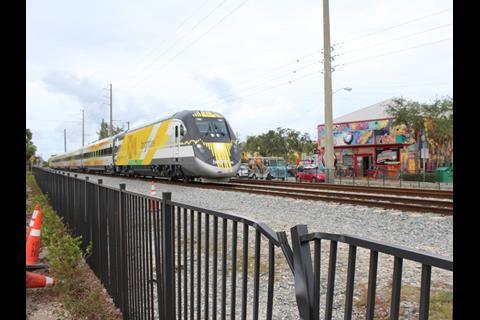 Brightline operates over the tracks of the Florida East Coast Railway, which have been rebuilt and upgraded for operation at 125 to 160 km/h. The passenger service is run by the All Aboard Florida subsidiary of Florida East Coast Industries, which last year sold the FEC freight business to Grupo Mexico.

The company is initially operating 10 trains each way per day over a 74 km section of its planned Miami – Orlando route, offering a journey time of around 40 min. It had hoped to begin service in mid-2017, but testing and commissioning has taken longer than anticipated. Introductory single fares are $10 in Smart class and $15 in Select with at-seat refreshments.

Services are expected to be extended by a further 46 km south from Fort Lauderdale to Miami Central later this year although construction of the multi-modal transport hub and related property development is running late. Brightline’s newly-built stations at Fort Lauderdale and West Palm Beach also include commercial and residential properties. Trains will not run north of West Palm Beach until the new line between Cocoa and Orlando Airport has been completed. Work on this 200 km/h section is now expected to begin later this year for opening around 2020.

Services are operated with a fleet of five Siemens trainsets, each formed of four coaches and a Charger diesel locomotive at each end; these are designed to be lengthened with additional vehicles as ridership grows. The trains are being serviced at the company’s Running Repair Facility in West Palm Beach, as the main workshops will be located at Orlando.

‘We are thrilled to have southern Florida preview Brightline with the launch of introductory service’, said President & Chief Operating Officer Patrick Goddard. ‘We believe the comfort and convenience of our travel experience, paired with premium hospitality, will set a new standard for passenger rail service. Our team will continue to ramp up operations as we prepare to fully launch this transformative new infrastructure asset.’

The first day of revenue operations was disrupted by problems with the online booking website, which saw Brightline briefly suspend ticket sales. On the day before, a pedestrian had been killed by a test train at Boynton Beach. The 31-year-old woman had reportedly attempted to cross the line at a level crossing after the barriers had closed. She is the third trespasser to be killed since the start of test running in late 2017.