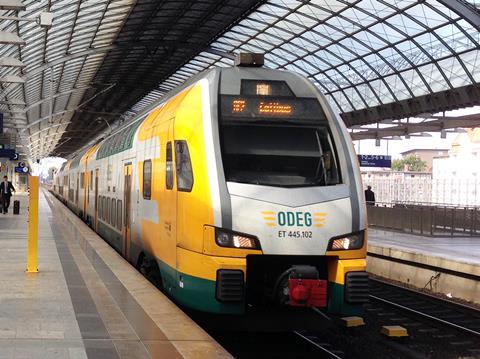 The contracts covering 17 routes will run for 12 years from December 2022. The international tender specified that bidders could win no more than two of the four lots, and that lots 1 and 2 were required to go to different operators.

The various routes are currently operated by the same two companies, but responsibility for some services will change, with the 11·3 million train-km/year operated by ODEG increasing to 17 million. The contracts provide for an increase in service frequency and train length, to be introduced in two phases. These will be aligned with aligned with the reinstatement, upgrading and electrification of the Dresdner Bahn between Berlin Südkreuz and Blankenfelde.

ODEG services are to be operated using 21 six-car and two four-car new Siemens Desiro HC EMUs, 16 refurbished Stadler Kiss EMUs and eight new Alstom Lint 54 DMUs. ‘The award of an important tender in the German commuter transport market confirms the excellent industrial and managerial capabilities of the FS Italiane Group in Italy and abroad’, said the CEO of Netinera’s parent company Gianfranco Battisti. ‘The liberalisation of the commuter market in Germany, one of the most important in Europe, is instrumental in exporting decades of Italian know-how in regional transport management.’