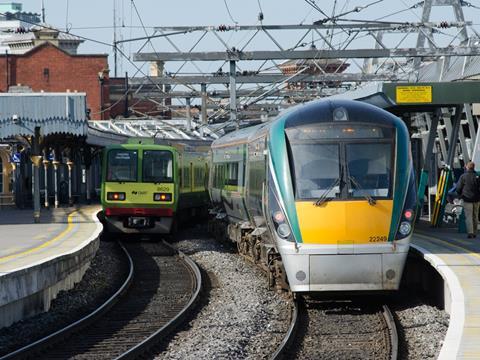 The €2bn DART Expansion Programme proposes a series of enhancements to the Dublin suburban network, ahead of the construction of the long-planned cross-city ‘DART Underground’ tunnel, for which a preferred route is to be safeguarded.

Initial investment will focus on infrastructure improvements and resignalling of Iarnród Éireann’s existing routes to accommodate enhanced services, including the recently-opened link through the Phoenix Park tunnel. The 1·5 kV DC electrified network will be extended to include the Northern Line from Malahide to Drogheda, the Kildare Line as far as Celbridge/Hazelhatch, and the Sligo Line to Maynooth with its branch to M3 Parkway. New stations will provide interchange with the capital’s bus and light rail networks.

Rolling stock improvements include the acquisition of 300 new vehicles, of which 100 will provide extra capacity and 200 will replace the oldest DART EMUs that date from the early 1980s. Some electro-diesel multiple-units are envisaged, which would allow the operation of through services beyond the electrified network. These may also be equipped to work under 25 kV 50 Hz, as this voltage is being considered for electrification of the main lines from Dublin to Belfast and Cork.

In the shorter term, IÉ is boosting capacity by refurbishing 28 stored DMU cars which are expected to re-enter service in 2019-20. A procurement exercise is underway for re-tractioning the remaining active EMD Class 201 locomotives, starting with a single prototype to evaluate the benefits.

Studies will look at the scope for infrastructure improvements to increase speeds on the main lines from Dublin to Belfast, Cork and Galway, including options for electrification. The economic benefits of faster operation on the existing lines will be evaluated against a proposed high speed line in the Belfast – Dublin – Limerick Jcn – Cork corridor, as well as the appraisal processes and value-for-money tests required under the Public Spending Code.

Reinstatement of the mothballed Limerick – Foynes line is anticipated to serve a €27m five-year port expansion programme announced by the Shannon Foynes Port Co. The conversion of some power generation capacity to biomass is expected to result in increased freight traffic moving imported fuel to the power stations.

Funding has now been agreed to roll out a train protection system across the whole network. A new National Train Control Centre to manage the entire network is to be constructed near Dublin Heuston station.

In addition to the rail expansion, the National Transport Authority will take forward the proposed north-south light metro in Dublin, following an options analysis of possible alignments and station locations. Costed at €3bn and now expected to be completed by 2027, the Metro Link would run from Swords via Dublin Airport and then tunnel under the city centre before taking over the southern part of the existing Luas light rail Green Line to Sandyford, in order to accommodate anticipated ridership growth along this corridor.

According to outgoing IÉ Chief Executive David Franks, ‘there’s a lot to do and it’s in everyone’s interest to have a railway that’s talked about positively. We need to deliver the commitments in the Capital Plan, on time and to budget, which will give the government confidence that it is worth further investment.’ He says IÉ’s financial position is ‘in the best place it’s been since 2007’, with increased revenue and an additional €60m of investment funding allocated for this year, as well as the 10-year enhancement programme. ‘All the ingredients are there; the key is just delivering.’